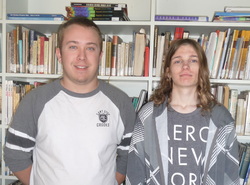 Calvin Elliot and William Chapman interview Paolo Brenciaglia, the grandson of Eva Webb who lived in the yellow house on Water Street across from Thinkers Lodge.  She was Cyrus Eaton's sister. 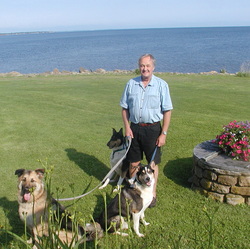 Paolo Brenciaglia began visiting his grandmother, Eva Webb, when he was a young teen.  He helped with the conferences, built the tennis court, and even assisted his grandmother hooking rugs.  As you can see he loves animals and taking them on long walks.  He is pictured here in back of Thinkers Lodge.  He and his wife Sandy make their home on Shore Road.

Paolo interview by Cathy Eaton on July 26, 2016:  Paolo describes his Grandma Eva Webb, her family, the staff that worked at Thinkers Lodge, and his involvement working for his grandmother and working at Thinkers Lodge.

By Calvin Elliott and William Chipman

Calvin: So you were in the car with Yuri on the way back from the airport?

Paolo: no, no I was in the car with him for the parade, Yuri came to Pugwash by helicopter. We were all gathered in back of the lodge, and there were crowds on Water Street and what have you, and so down comes Yuri, and of course there were all sorts of Russian KGB everywhere and the crowd separated. And now, this is one of the things that always impressed me, Cyrus Eaton, he had a very keen Hawkeye, he saw someone in the crowd he hadn’t seen for forty years and said excuse me, walks down to this fellow, Joe come and meet Yuri, how are you, big hug. Inaudible, he was an amazing guy because he never forgot a friend, okay, it didn’t matter what the occasion was, and I don’t wanna say he was humble because he was not, but in terms of friendships and remembering things, he was amazing. Everybody liked him not matter what class of people you were.

William: was Yuri open on his feelings towards Pugwash?

Calvin:   Can you remember anything that stood out about Yuri?

Paolo: Yuri was a small guy, he had a big hat(?) very friendly he shook hands with everybody. Very good ambassador for Russia I guess, apparently, I don’t know if this is propaganda or not but apparently after he came down to earth, one particular wish he made was to come and see Pugwash, the place that was so famous for world peace, and so he did, 1961.

Calvin: Was Yuri open on his feelings towards pugwash, did he talk much about what it meant to him?

Paolo: he talked through an interpreter so…

Paolo: the Russian ambassador was there so I guess, I called it dog and pony show, inaudible, but the sincerity of wanting to see Pugwash was real, as a result of that visit, I don’t know, do you remember Khrushchev, he had a foreign minister called “” he was the wiz guy in terms of foreign relations and during the cold war that was tough job. Khrushchev instructed him to donate a three horse troika and driver for life. No the driver wasn’t for life, the troika stayed in Cleveland and the driver trained someone and Cyrus Eaton paraded his troika everywhere.

William: how Many years have you lived in Pugwash?

Paolo: I came to Pugwash in 1954, I worked the summers up to 1961, put myself through college, I left to work for shell Canada in Toronto, and came back anytime there was an occasion to come back. In the 60’s I remember I came back, in ‘68 we had a little family reunion, I always drove my grandmother from Toronto to Pugwash because she was organizing the conferences for the education group, ad so I drove her and picked her up in the fall, my vacation, I love Pugwash. So but living more or less more than 4-5 months in Pugwash was from 1954 to 1961 then in 1972 I came to Pugwash for a very interesting conference and at the end of the conference Cyrus Eaton said I have a surprise for you, and there happened to be a solar eclipse. Carol Sagan was invited for the weekend to talk to the family and demonstrate as the eclipse went. In total I guess you can say I lived in Pugwash now since 2000 so that’s 14 years plus 6 years prior to that so that’s 20 years total.

Calvin: so you lived in Pugwash during the cold war?

Paolo: yes during the summers.

Calvin: Can you remember what Pugwash was like during the cold war, were people scared here or was it kind of mellower?

Paolo: for the conference first of all you have to understand they were twofold, one was disarmaments, but the longer more extensive conference which Cyrus financed was education because he believed education was the foundation for the safety of the world, he strongly believed guys your age would save the world and not guys my age or his age.

Calvin: The media attention that Pugwash was getting, was it obvious, was people, were you aware of it?

Paolo: The media, let me explain the mechanism, um, Chesakapeaken olio railway was basically owned by Cyrus, Cyrus Eaton had an absolute allergy about press on pineal point(thinkers lodge) because he wanted that to be a thinking place, so Eaton park and the stage were dedicated for telling the press what happened. It was always offside, even here at the high school they would invite the press but never at the lodge.

William: How do you feel about Pugwash and its role in the cold war?

Paolo: I’ll be honest, when I was your age, I had no idea how important the process was.

Calvin: Finally, what does Pugwash mean to you?

Paolo: Well it’s the home of my mother, uh, I get confused because lately, I always thought of it as my second home but not its primary and Italy is my second home. Personally when I was in your age group I looked forward, I mean I lived in Montreal. So uh, I came to Pugwash bottom line, to relax and find some peace, the same as the thinkers found in Pugwash, exactly the same, its magic this (inaudible) if you want to be at peace with yourself and your neighbours and other people, most of Pugwash, is a very good community. One thing I’m really impressed, your age group.