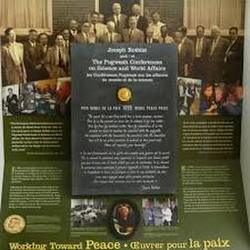 Joseph Rotblat donated his Nobel Peace Prize to Thinkers Lodge where it is displayed across from the Lenin Peace Prize awarded to Cyrus Eaton.

A meeting of the minds: The Pugwash Conference 25 years ago Archives 4:08 Scientists and intellectuals meet in Pugwash, N.S. to discuss the possibility of peace in a nuclear age. Listen to Rotblat and Eaton on this CBC archived 4-minute clip about Rotblat and his campaign against nuclear weapons on day he won the Nobel Peace Prize.

Scientists from around the world meet in Nova Scotia for the first meeting of the Pugwash Conference today. Philanthropist Cyrus Eaton plays host in his hometown of Pugwash -- a scenic thinker's paradise where scholars can discuss strategies for peace in a nuclear age. In October 1995, Joseph Rotblat, chair of the Pugwash Organization, receives the Nobel Peace Prize.

The idea for the conference was born of an antiwar manifesto issued by scientist Albert Einstein and philosopher Bertrand Russell in 1955. They argued scientists played a crucial role in the negotiation of peace. Over the years, the conference grew in influence and reach, playing a significant role in the development of the Non-Proliferation Treaty of 1968 and the Anti-Ballistic Missile Treaty of 1972. These CBC Radio reports examine the importance of Rotblat's award and the Conference's origins.


The Nobel Peace Prize 1995 was awarded jointly to Joseph Rotblat and Pugwash Conferences on Science and World Affairs "for their efforts to diminish the part played by nuclear arms in international politics and, in the longer run, to eliminate such arms"

Good overview of Rotblat's life and achievements with photographs

Joseph Rotblat Professor Sir Joseph (Józef) Rotblat (4 November 1908 – 31 August 2005) was a founder and leading inspiration of the Pugwash Conferences on Science and World Affairs over many decades.  The only Manhattan Project scientist to resign on moral grounds, Rotblat became an ardent voice for an end to nuclear weapons and other weapons of mass destruction.  He said elimination of nuclear weapons was his short-term goal, and his long-term goal was the elimination of war.  He emphasized the social responsibility of scientists, and urged young scientists to spend at least 10% of their time thinking about issues other than their chosen field.  He jointly shared the 1995 Nobel Peace Prize with Pugwash.  He received many other awards during his lifetime, wrote more than 400 articles, including 24 books, and was widely quoted in the media.
Joseph Rotblat -- link to page created on Pugwash Conferences and World Affairs:

JOSEPH ROTBLAT BIOGRAPHY
Joseph Rotblat telling his life story to Katherine Thompson (AUDIO)
First of 40 audio oral history recordings made by the British Library.
These 1999-2000 recordings feature, the interviewer.  As Rotblat never wrote an
autobiography, this is an invaluable resource for anyone researching Rotblat’s life
and the history of Pugwash.  Links to the rest of recordings in series are provided.