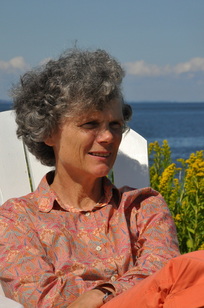 Vivian Godfree is a member of the Northumberland Historical Society and has lived in Pugwash since 1975, so that will be 40 years.

Question: Who or what do you blame for starting the Cold War?

Answer: That’s quite a complex question. I think I would blame both sides. After the second world war they found themselves in opposing views on how a country should be run. So both sides had reason for wanting maximum defense. The Soviet Union who had lost about 27 million people during the war and was by then quite a dictatorship under Stalin had an interest in defending itself. The United States and Western Europe was very keen in stopping any kind of Soviet expansion. So it was a matter of both sides building up their defences and it became a race to who could have the most weapons. I also think that there was an interest especially in the States for making weapons because they could make a lot of money from it. But it was a very complex situation after the First World War and the Russian Revolution and peoples’ views on each other. Nobody could really start a war because everyone would get killed, but on the other hand when I was growing up there was always a shadow of a nuclear war, and that’s what we all feared the most. There is still nuclear weapons but I think people realize the terrible destruction that could be made by these weapons.

Question: What do you remember about the Cold War?

Answer: Well I was born in 1946, shortly after the second World War, so most of my childhood was during the Cold War, so we were taught that the Russians were to be feared. I can remember at that time in my childhood they were still testing weapons in the atmosphere, so my parents worried all the time about radiation being in things like milk. Whether or not it was safe to drink. In school we used to have air raid warnings, and people were building these bunkers for people to shelter in, in case of a war. But they weren’t meant for ordinary people to shelter in, they were built for governments, and that was going on during the 50’s and the 60’s.

Question: What significant events do you remember from the Pugwash Peace Conferences?

Answer: Well of course I wasn’t here in 1957, but, I can tell you from another point of view because my father had a very good friend who came to the first Pugwash Peace Conference, and he had won the Nobel Prize. He was one of the chairmen for the first Pugwash Conference. So my parents used to talk about the conferences. But when I came in 1975, they were holding conferences here quite frequently. We once drove a delegate back from the airport.

Question: Can you tell us what you know about the Empress Hotel and when it burned?

Answer: It was built during the First World War. It was built by Benjamin Mattinson in 1915. People were so worried about people coming back injured from the war, and he built it for his son because he was sure his son would come back injured, and therefore he would need a job. He would be able to just sit behind a desk. In fact he wasn’t injured when he came back, but he ran this hotel, and it was burnt in 1928. It was quite magnificent and it was on Water Street.

Question: Have you ever met Joseph Rotblat? If so can you tell us about him?

Answer: Yes, a number of times. It must have been the late 80’s early 90’s he came to the school, and he came to the conferences here. He was a very quiet, gentle spoken man. He had an office in London, and I went there but he wasn’t there. He also knew the friend of my father.

Question: In your opinion what role did Igor Gouzenko play in the Cold War?

Answer: The Russian spy in Ottawa. I don’t know, there were many spies on both sides during the Cold War. I’m not really sure what effect he would have had. I’m sure spying is going on now, but every country is doing it. Now its done by hacking into people’s computers, and in the old days it was listening in to people’s telephone conversations, bugging their rooms.

Question: Can you tell us about when the Berlin Wall went up of fell?

Answer: Yeah, I was about 15 I remember when they were starting to build it. They were building it through the middle of Berlin. In 1965 I was in Berlin with a youth group, and we saw the Berlin Wall. By then, it was a solid wall. At first they just put up fences. I think it made a very big impression on me because you can imagine if they built a wall straight through the middle of Halifax, and said all people on this side can no longer be able to come over to the other side. Well one of the things we did when we went to Berlin was we went to the street where the wall went straight through the middle of the street. There was people who lived at one end of the street who would be neighbors with the other end of the street, and suddenly they could no longer have any kind of contact with them. So they had the wall which was probably two or three times higher than me, then there was no mans land, and then there was a fence. They had bulldozed the houses in between. The people on the West built this platform so they could stand and look at people over top of the wall. The people on the other side had built a platform, and whenever someone got married or had a child, or something they would climb up to the top and wave a flag. They might bring the bride and groom up so they could see each other because they had been neighbors all these years, and they no longer could contact each other. I was British so I was allowed to go into East Berlin, and we went through this check point and our passports were taken. I got to go in with the youth group, and it was quite eerie because, there were sorts of things we hadn’t been thinking about. For instance we had taken picnic, and there was an orange in it, and we were sitting in a square in East Berlin, and we drew a crowd and we couldn’t figure out why. It was because we had oranges and they had so few and no oranges. If you went into a store there would be hardly anything there for you to eat. The place was still like a bomb site, and this was I supposed 20 years after the war.

Question: What do you remember about the Cuban Missile Crisis?

Answer: I think my parents thought it was going to be the end of the world, because it was a standoff between the Russians and the Americans and nobody really trusted either side, so nobody knew if anyone would really release a nuclear weapon or not. So I remember my parents and their friends being very frightened. I don’t know if I was as frightened, I was 16, and maybe I didn’t quite understand the seriousness of it.

Question: Can you tell us what you know about the Rosenburg Execution?

Answer: Only that it happened. I was a baby at the time, but people talked about it. There was fear all the time about different spies. It wasn’t really a war, it was basically a weapons race.

The big cause of our youth was belonging to Ban the Bomb. We went on marches to get rid of nuclear weapons because everyone was so frightened of it. It’s amazing that nobody has set them off. They were nervous of another person like Hitler invading countries.

She showed us a book by a relative of Cyrus Eaton, and it was about how the Pugwash conference came to be. She also showed us a photo of her father’s friend who attended the conference.