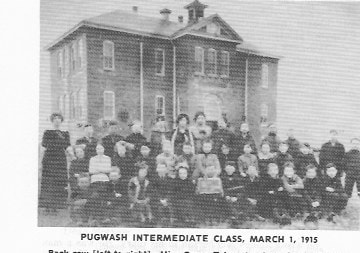 The Pugwash School was built by Benjamin N. Mattinson, Thelma Coburn’s grandfather.  It was constructed on Queen Street on same property as present Cyrus Eaton elementary School. The previous school burned around 1911. The new one was brick, most likely from the Pugwash brickyard.  The former school was wood.  Thelma suspects that few buildings were constructed from the Pugwash bricks because the bricks were not durable probably due to the inferior clay.

Two people shared each seat.  The front of your desk was the back of chair of the people in front of you. Desks had built-in inkwells without ink, so each student bought their own bottle of ink.

A central coal furnace heated the school. The coal was stored beneath the stairs; perhaps the furnace was located there as well. On the roof in a turret resided the bell where the principal pulled the rope to ring it.

Thelma remembers many of her teachers. Willena Reid taught Thelma in primary 1 and 2. For grade 3, Thelma walked 2 -3 miles to the South Pugwash School, a one-room schoolroom. She returned for grade 4 with Emma Park from Pugwash Park.  For grade 5, her teacher was Arleen Burnside.  Each teacher taught three classes.  The next three years she had Kathleen O’Connor.

Thelma decided to attend a one-room schoolhouse in Amherst Head for her grade nine. She explained that year was the best thing she did education wise.  The students just taught themselves.  There were 45 students in grades 1 through 10. The high school students got no instruction until the younger ones left. Thelma learned how to learn. Then she returned to Pugwash after Mr. Wilkinson left (an instructor who never seemed to look up and always had his face buried in a book) for grades 10 and 11.  Mr. Selig, her teacher, was very good. He had been in the Second World War and had no patience. He sometimes threw things at students who were not being attentive or who were chatting.  She graduated grade 11 in 1952 and then went to grade 12 in Tatamagouche because the Pugwash School had no grade 12.

Thelma’s brother, Glen, had also decided he wanted to Tatamagouche for high school and lived with an aunt.  Another brother, Roy, was two years ahead.  Other students attended school in Oxford. Thelma noted she loved school picnics and ball games. She liked her studies as well.

Cyrus Eaton returned to Pugwash and by 1940, he expanded the school and added improvements. Thelma suspects he might have been the one who had central heating installed. He added washrooms for the girls and a home economics room in the basement on the left.  On the right side in basement, he added the boys’ washroom and the industrial arts classroom.

On the second floor, he built a library and equipped it with wonderful books. The principal said it was best library around.  The same area also served as a science lab.  There was a general teachers’ room. Cyrus Eaton’s mother, Mary Adelia MacPherson, and his beloved teacher, Margaret King, had encouraged Cyrus to read the classics, science, religion, and philosophy. Cyrus was a life-long reader, and like Thelma, a life-long learner.

Thelma graduated in English and Sociology from Mount Allison a year before Heber Colbourne did.  Thelma became a teacher because she met this wonderful man.  She had planned to travel to Ontario for postgraduate work.  Instead, she took her BED (Bachelor of Education) at Mount Allison, so she would not leave Heber to the designs of women at his college.  For one year, Thelma taught at a one-room schoolhouse in West Pugwash. On the final day of school the students persuaded her to go for a picnic on nearby beach near where she eventually made her home.

Thelma and Heber married one month after graduation.  They had planned to get married in June.  However, Glen was graduating from Pine Hill in May to be a minister, getting ordained in June, and married in June.  Therefore, her mom suggested they get married on July 16th, 1958 on her parents’ anniversary.   They have been married 59 years. Heber went to Pine Hill in Halifax, where Thelma started teaching.  Her first post was teaching grade 5 in Bedford.  Her second post was at the school for the blind, and she had to learn Braille.  She taught math for the higher grades.  One of the girls wanted to know if she knew Napoleon Bonaparte.  Thelma learned the blind children had no concept of age of their teachers.  The books had to be translated to Braille.  Some books were printed and some were in Braille.

Thelma substituted taught after she had her four children.

Heber retired twenty years ago.  Thelma’s mother decided that they could return to live with her.  Instead, they moved to cottage in West Pugwash.  They built a more permanent cottage and were easily able to visit back and forth with her mother.   This beach was the one her students from the one-room school house had their final day picnic.