The Boy From Pugwash: A Biography of Cyrus Eaton 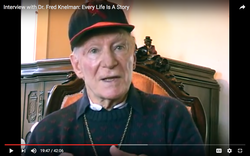 Here is an interview with Fred Knelman.  Published on Jun 2, 2014
Author, engineer and conservationist Dr. Fred Knelman is interviewed in 2003 by Dr. Joan Russow. In this rare interview, the late Dr. Knelman weaves stories and analogies to elucidate and educate people on the importance of, and our relationship to, the ecology that sustains us.
The Boy from Pugwash: A Biography of Cyrus Eaton by Fred Knelman -1962
(unpublished) – Permission from Suzy Knelman

Fred Knelman passed away in November 2006. As executor of his estate, his wife Suzy Knelman, gave permission to include his work. She had never seen Fred’s biography of, Cyrus Eaton. It was not among Fred’s papers.  She regrets that she does not know what became of it!
The publishing company was Harvest House Limited Publishers from Montreal, Canada, was sold in 1995
Betty Royan, Cyrus Eaton’s personal assistant, was in correspondence with the publishing company and Doris Winkler, assistant to the publisher.  In the Western Reserve Historical Society there are four drafts with the papers of Cyrus Eaton.  For reasons unknown, the manuscript was never published, but Royan and Eaton made comments on the drafts.  Royan’s correspondence was on August 20, 1962 which included a corrected version of Cyrus Eaton manuscript.  She felt they were close to production stage.  For unknown reasons, the biography was never published.  Here it is with comments handwritten likely by Royan or Eaton.