Click arrow above to listen to interview with Terry Smith.  It follows small section with Lisa Betts.  Her interview in under Fire at Thinkers Lodge.

Terry Smith “The Spirit of the Times” – Life Magazine


“During the 1957 conference at Thinkers’ Lodge, I was standing right across from the drug store. It’s now a little antique store. It was the Post Office at the time and I was standing on the steps, and I had a little t-shirt on that said “Pugwash. The Life Magazine photographer came along and snapped a picture of me standing there with my little cowboy hat on. I was eight. I have that picture. Life sent me the picture, and they put it, I believe, in Life Magazine at the time. I guess they felt it embodied the spirit of the times.” 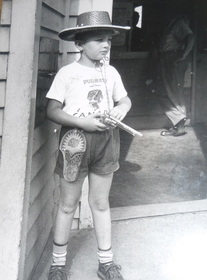 “My father was Harry Smith and he ran what was then the Cumberland County Hospital here. It was an institution for the mentally handicapped and he drove some of the participants in that first conference to Pugwash and did some driving during the conference.”  ~Terry Smith 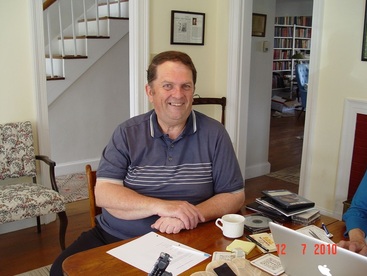 On a Cheesy Mission

“When I got my driver’s license, I came down to see if there was any possibility that I might be able to do what my father did: drive participants to the conferences from the airport in Halifax and from the airport in Moncton. I don’t know if they’d hire anybody to do that kind of job today or not, but I was only seventeen at the time and they trusted me well enough and gave me the job.  From that time onward, for every conference, they called me to drive people and I was sent on all kinds of missions.  One time I remember they sent me to look for a complete wheel of Brie cheese, and finding that in Nova Scotia was quite a task. I finally did locate it, at a little Deli Shop. I had to make several journeys and a lot of phone calls, but I finally found the cheese. One time they sent me for some Galliano Wine in gallon jugs, and I had to drive all to New Brunswick.  I drove a 1979 Caprice Classic.”  ~  Terry Smith

“I saw Joseph Rotblat in the dining hall shaking hands. I had the opportunity to drive Dr. Rotblat several times back and forth to the airport. He loved to talk and didn’t put on airs.  He was down to earth, vigorous for his age.  Things still excited him.  I noticed his ambition and his drive.  He thrived on learning new things.  I think he was 97 the last time I saw him.  I took pictures of Dr. Rotblat, Ray Bourque, Leo Jamieson, and the chef, Selby Clark.  A few years later they had all passed away. The Pugwash District High School named the foyer after Rotblat.  Atlantic Canada in the Global Community is a textbook used in grade 9. It has a picture of Dr. Rotblat and a little bit about the Pugwash conferences.”

“In 1997 Sir Mark Oliphant came here for the fortieth year reunion of the 1957 conference which he participated in.  He is another person who stands out in my mind. Of course, I don’t remember him at the first conference because I don’t remember too much that conference. But Sir Oliphant was telling me he was Olivia Newton-John’s great uncle. We had a great conversation.  I brought him from the airport and took him back and he was just a wonderful person. I don’t really know what all his involvement was, but he had a lot to do with the anti-nuclear movement.  [He told me] “This will be my last trip here.”   You know he knew.  He was an old man.”

Father Theodore Hesburgh
“I particularly remember “Father Theodore Hesburgh.  He did some work as an American Diplomat, but he was the president of Notre Dame in South Bend, Indiana, and he was just so personable.  I mean he insisted when I took him back to the airport, that I come in and have a steak dinner with him before he left.  He invited me to come visit him in South Bend.  He had a huge amount of money in all different currencies and he threw it on a table at the Halifax airport.  I was in shock.”

Mark McGuigan
“I think, at one time they had a conference of Justice Ministers here, and I remember Mark McGuigan, who was the Justice Minister in Canada at the time.  I picked him up at the airport.  I remember he gave him his card, and said that if I ever came to Ottawa, he would make sure I had a personal tour of the Parliament Buildings.  They packed a lunch for him.  He was very fond of salmon.  He game me some of the sandwiches to eat on the way home.”

“When I went to school, my love was math.  I became interested in history after I finished school.  After I met these people from the conferences, I read about the nuclear movement, Nagasaki, Hiroshima, and the anti-nuclear movement.  I taught history, geography and global issues at the Pugwash District High School for 34 years.”

“Of course, I lived through the Cold War and was very aware of what was going on at the time. I think Thinkers’ Lodge is a sort of shrine to the Peace Movement. This is where it all happened, beginning in 1957.  I just feel that it’s a piece of history that’s well worth preserving.  You know, the history surrounding it is just phenomenal.  So many world leaders came and made the efforts toward trying to stop the spread of nuclear weaponry and to try and stop the possibility of a nuclear war. I always mention this to my students.” 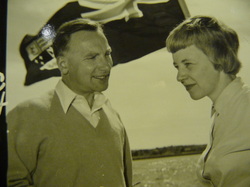 “In 1995 when the Nobel Peace Prize was awarded to Joseph Rotblat and the Pugwash Movement, reporters descended on the village of Pugwash, and no scientists were here to greet them. Leo Jamison called me and asked me if I would talk to the reporters and do an interview.”

“I did interview on the other side of the Staff House with Midday on CBC.  It was cold, and I was shivering. The main question they asked was why did they choose Pugwash to hold these conferences. I told them Nehru offered accommodations in New Delhi, but because of the Moslem/Hindu conflict, it was rejected. Cyrus Eaton offered the Thinkers’ Lodge as a place for them to hold this meeting.  They asked me where the people stayed during conference.  They stayed in The Tides Inn, they stayed in The Lodge, and some were billeted in private homes.  They asked about Cyrus Eaton’s friendship with the communists.  I quoted Irving Mundle who used to tell how Cyrus Eaton had said, “You don’t solve problems unless you can make friends with your enemies.” ~Terry Smith 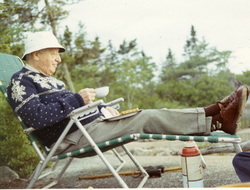 “I met Cyrus Eaton on several occasions. He loved the water. I know they always used to get motorboats to take him up Pugwash River. The last time that I saw him he was sitting out here on the lawn in his chair, and Emerson, his little Jack Russell Terrier, was sitting beside him.  It was a lovely sunny day.  I think it was a family picnic type event.  He loved picnics.” 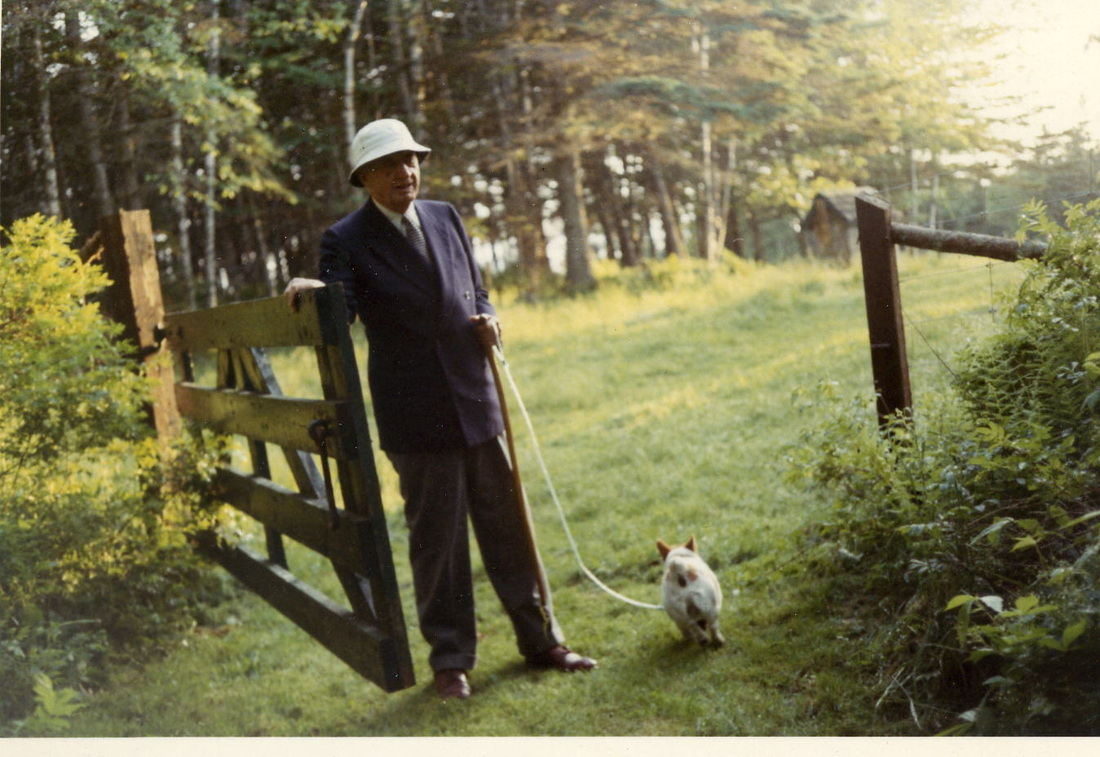 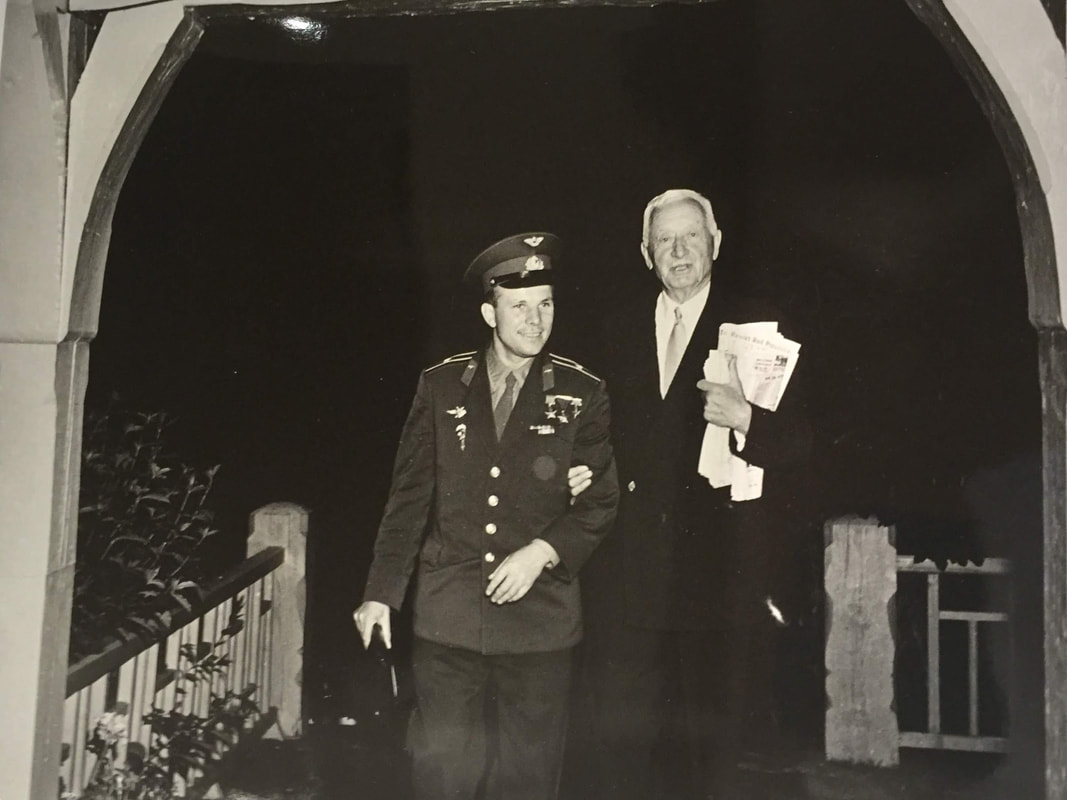 “When the conferences were here, it was a low key thing.  There was not heavy security except when Yuri Gargarin came here in 1961.” ~ Terry Smith

Serenity of Pugwash Village Contributes to Success of the Conferences

“The serenity of the village had a lot to do with the success of the conferences.  The participants went out into the harbor, boating and swimming.  They had evening entertainment. They took little trips. They spent time with their billets.  They walked around the village and talked.”  ~ Terry Smith