Ruth McGrath remembers working at Pagweak Tearoom in the 1960s 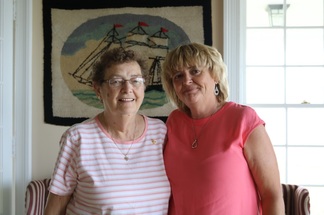 ​Ruth McGrath visited Thinkers Lodge on July 23, 2016, during Harbourfest with her daughter, Cindy.

Ruth worked at The Pagweak Tea Room for several years in the mid 1960s after Donnie Jamieson hired her.  May Sarson and Brian Jamieson’s wife were two of the other waitresses.  Raymon Bourque, Cyrus Eaton’s assistant, coordinated everyone.  Ruth remembers his humor and how he looked after the staff, always making sure they could take lobster meat home and enjoy the leftover wine. Sometimes, they served appetizers in the great room during cocktail hour.  She remembers Raymond telling them to put whatever they found in the refrigerator that was tasty on crackers, even olives.

Ruth enjoyed working the Pagweak Tea Room, now called The Lobster Factory.  The wait staff served breakfast, lunch, and dinner. After they took the food into the dining hall on trolleys, Raymon carried the dishes to the tables. In a summer they might have four conferences, each lasting two or three days.  Ruth said the pay and the tips were good.  The young women were required to wear white dresses, so Ruth borrowed a couple of nurse’s uniforms and white shoes.  Once when she broke a dish, she remembers hiding it in the trash.

Ruth found Anne Eaton to be very down to earth and easy to talk to.  She found her very stylish.

Ruth told a story about skipping school one day in the spring with her girlfriends. She had heard rumors that there was a ghost haunting Thinkers Lodge. The girls walked over to the Lodge where the caretaker, Leo Jamieson, was opening the house and painting.  Sheets covered the furniture in the Great Room to protect it from paint drips. After touring the house, the girls came down and were shocked to see gold sandals and painted toe nails sticking out from under a sheet covering a chair.   Clearly something dreadful was under it.  They bolted out the door to the amusement of Leo who had hidden one of their friends under the sheet.

As a child, Cindy loved going on the Chesapeake and Ohio train cars (where some of the conference attendees stayed) and getting a treat of hotdogs and ice cream. The children saw the fancy dining room, and someone in uniform with a tall hat served the food. He was very kind to all the kids