Notes from Talking to Mary Jamieson -  March 2018 by Vivian Godfree

Meeting with Joseph Rottblatt
He was charming – There is a photo of Mary and JR, and Mary’s daughter Anne with JR

Dining Hall Work
Worked for every conference from 1980 as a waitress until 1997 when I was put in charge and had to hire the cook and staff after that.  I hired Kathy Dean, the daughter of the former cook Selby Clark.  In 1997 I was the book keeper after my father-in-law, Leo Jamieson died.

Memorable Conferences:
In 2003 was a big year with a meal in the school, as well as meals at the Lodge.
(Photo of helpers sent.) Otherwise over the years we didn’t talk to the delegates much, unless they had an accommodation problem.  One memorable guest was one who brought a chair from Anne Eaton’s Alma Mata.

Meals Served:
Always Lobsters on Saturday – many of the delegates had never eaten lobster.
Selby Clark made really good food, and his wife made lots and lots of cookies.

50th Anniversary
Romeo Dallaire was there.  The Pugwash Peace Exchange did a lot of the organization but I did the kitchen staff.  Anne my daughter cooked, and my sister Maureen arranged the flowers.  The kitchen help were Leah Jamieson, Louise Hillhouse, Karen Chiasson, Teri Maracle, Vivian Godfree

Duties
Donnie did the cleaning and I helped.  Later Eleanor cleaned the Lodge with Donnie, and I did the kitchen and dining room. Every spring I would wash everything in the kitchen. I did the cleaning in my lunch hour while I was working as receptionist for Dr Greg Gass. I kept the books and still have the journal.  Everything was put into the Simply Accounting Computer Program.

After the Fire:
The upholstery was shipped to New Glasgow for restoration.


Raymond Bourque:
He was a lovely man, he liked women, and he liked to joke a lot.  Leo, Selby and he laughed a lot.

Other Family Members:
Eleanor and Jerry Jamison took over looking after the Lodge after Leo in 1997, Bryan Jamieson was on the PPC for a number of years, Bobby Jamieson worked there when he was young.

Mary Jamieson worked at Thinkers Lodge for many summers.  She is the daughter-in-law of Leo and Donnie Jamieson.  Mary lives in the house where Anne Eaton stayed when she came.  She has one of Cyrus Eaton's canoes as well as a wooden box from the sheep farm where Eva Webb (Cyrus's sister) lived.  Mary was the bookkeeper for the Pugwash Park Commission for a period of time.  Over the years she has done a multiple of tasks to keep the lodge running and the guests happy.  She has waited tables, kept the lodge clean for guests, helped with the repainting in the spring after the rough winters took their toll on the old building.  She found Anne Eaton very gracious.  She came with her mother-in-law Donnie in 2010 and shared information about villagers who had billeted conference attendees.  Her years of service to Thinkers Lodge and the Lobster Factory are much appreciated. 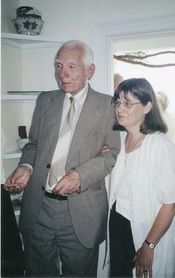 Mary Jamieson is pictured here with Joseph Rotblat in the Lobster Factory. He visited many times after his initial conference in 1957. 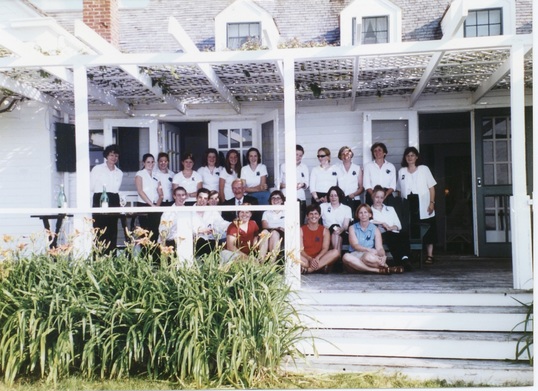 In 2007 during the 50th reunion of the 1957 conference, Mary Jamieson supervised the staff.
Some of the people helping
Kathy Dean did the cooking. Shanda Cameron assisted Kathy.  Appetizers were served on the deck and lawn.  Holly Dean, Carla Armsworthy, Jane Armsworthy, Mary Jamieson helped with the appetizers and waited on tables.
The main dinner consisted of Piper Salad, lobster croissant, zucchini toss (for vegetarians), strawberry shortcake.  The biscuits were made with orange rind, whipping cream, butter, and flour.
Ray Szabo is also in photo with suit and tie.  He wore red-rimmed glasses and had a mustache.

Appetizers were served with Jost Wine.