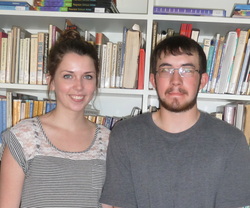 Melanie Sprague and Justin Brownwell interviewed Glenda Kent who worked at the Dining Hall and Thinkers Lodge from 1957 to 191959. 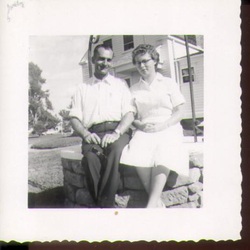 Glenda Kent pictured here in 1958 next to Ramon Bourque, the man who supervised the staff at Thinkers Lodge, Deep Cove, and Acadia Farms.  They are sitting on the wishing well behind Thinkers Lodge.
Interview of Glenda Kent

-How did you come across the job of making and serving food?
-Did you live in the area of Pugwash at the time of your job and the Peace Conferces?
-What kind of food did you serve for the delegates?
-Were the delegates hard to please in terms of food likes?
-Was all the food from Nova Scotia, or did some delegates have food from their own countries made for them?
-What was the demeanor of the delegates you served food to?
-Did any of the delegates look down on you as a servant?
-Did you serve any food in the Thinkers Lodge and just not the dining hall? If so what was the atmosphere like with all the delegates deep in conversation?
-Did you have any training for this job?
-If you had a boss for your job who was it?
-Did the delegates like being in a small quite area of Pugwash?
-Did any delegate in particular stand-out the most to you? The way they dressed or acted?
-Did the delegates speak any about their private lives from back home?
-What type of personality did Joseph Rotblat have?
-Were you intimated by the delegates?
-What do you know about the Cuban Missile Crisis and the Cold War?

As I remember, my three summers (1957,1958,1959) at Thinkers Lodge were memorable, but some of the details, as to who was there and where they were from, are foggy.

Mr. Eaton's sister, Eva Webb, was looking for staff and I went to see her. She lived in the house across the road from the dining hall - believe it is a B&B now. I didn't make/prepare the food in the dining hall, just served in a waitress roll. We wore starched white uniforms, and white shoes. There were two chefs. We often did the dishes, although there was one person plus the chefs doing dishes.

Yes, I lived in Pugwash River, but one summer boarded with Mr. and Mrs. Everett Mundle, now deceased, who owned a hardware store on Water Street.

The guests were served the typical, tasty Nova Scotian foods - dinners would be varied - beef, pork, turkey, salmon and lobster - soups, sandwiches, traditional breakfasts, lots of fruit and vegetables. I can't recall anyone asking for his/her home country food. (Some of the delegates brought along spouses for the conference). They were always pleased with their meals, courteous to their waitresses, and left us tips at the conclusion of their conferences.

(In regards to "Did you serve any food in the Thinkers Lodge and not just in the Dining Hall") I was a waitress one year, and was at Thinkers Lodge two years. Each night, weather permitting, there was an outdoor cocktail hour - everyone met around the wishing well out front so they could admire the sun glistening on the harbour water. I would prepare the hor d'oeurves (hot and cold) in the lodge kitchen. On damp evenings, they gathered before dinner in the lodge "Great Room".

I never heard any of their discussions, as some were in the dining hall, and some met at the local high school. We never experienced any dissension among the delegates.

I did not have any special training for this job, but Mrs. Webb gave us her expectations to have the guests happy. I had worked at a restaurant one summer in Oxford, so that helped with the tips on being waitress. Keeping the lodge clean, making beds, was just part of my homelife expectations, which made the job easier.

Mrs. Webb, I guess, was considered our boss, but Mr. Eaton's butler, Raymond Bourque, also assisted us. I was assigned to Mrs. Eaton when she came to the lodge, she was in a wheelchair. She was most pleasant and appreciative. She even became a friend of my mother.

The delegates seemingly enjoyed their Pugwash experiences. They also had side trips to other parts of Nova Scotia. I do remember receiving an appreciation letter from a College Dean in Maryland enclosing a photograph of myself carrying a dinner tray! Some would chat with us, but they were always deep in thought - reading or THINKING - when not in group settings. The conferences were three or four days, so they "had to make their time count."

I'm not sure that I met Joseph Rotblat and have to admit, know very little about the Cuban Missile Crisis, or the Cold War. Sorry.

I hope this helps in some way. Best wishes with your studies.