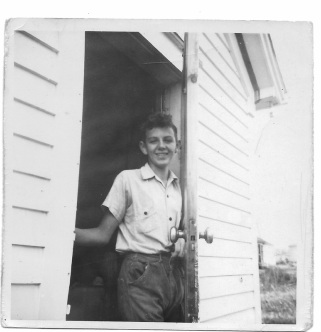 Godfree Vivian Goddfree and Thelma Colbourne interviewed Garth Mundle in his cottage on Pugwash Point.  He worked at Pagweak Tearoom as a gardener from 1953 to 1955.  Below is a transcription of the interview.

“I started working in Pugwash at the Pineo Lodge in the early years of my life which is known for the peace conferences. In recent years I have been involved in peace work and peace issues in the Middle East and in Central America.  We met Rabbis for Human Rights.  We tour the settlements every visit to hear their point of view.”

“Cyrus Eaton was running Pineo Lodge as a tourist venture. Of course, it was not profitable.

I worked in the Pagweak  Tearoom as a waiter. I was the only male server in the dining hall. The rest were all women. That was 1952 or 1953. At that time Alma, my mother's sister, was the chef in the kitchen. Several people helped her.  She was Alma Coulter.  She married my father's brother, Sherwood Mundle, and she became Elma Mundle. My mother was a twin sister to Alma, and the twin sisters married the two oldest Mundle brothers. Alma ran a tourist home before she began working at the dining hall when I was two years old. Alma’s tourist’s home was at the end of the lane. Her house was in a Dutch colonial where Alma’s son, Gary, lives.

Alma was renowned as a cook. People came from New York and Halifax every year, stayed in the Lodge, and ate in the dining room. There was a fireplace at the end of the dining hall. We had a full house with about 10 to 15 tables. The Mills Brothers who ran the Mills Brothers store came mostly because of Alma’s cooking.

The meals (at Pagweak Tearoom) were fabulous. We did breakfast, lunch, and dinner for the guests in Pineo Lodge. It was open at mealtimes for the visitors at the Lodge and outside visitors. Alma made a wonderful chicken dinner. We had lobster quite regularly. She made fabulous pastries as well, and of course her famous homemade orange rolls. When I was the principal at St. Stephen's College at Alberta, these rolls got put in a recipe book for a church for a fundraiser; they were called motorcycle rolls.”

Thelma Colbourne shared that some days she would fill in for Gladys as a dishwasher. Thelma said it was the devil to get the stuff off the bottom when she was doing the dishes after Alma made those rolls. “By the time I got to them and they hadn't been soaked, they were hard to clean.”  She used orange rind.

Garth Mundle continued, “I can picture the kitchen exactly as it was laid out. Of course, we were always joking and carrying on in the kitchen.

That first summer, I developed the pain in the bottom of my right side. I can remember leaning on the counter when the pain was so severe. The pain was so severe that I had to slide out of my bed to get up in the morning. They eventually took me to the doctors near the end of the season. I was going to Mount A that fall. They discovered that my lungs were full. They drove a needle in my back at the hospital and drained the lung. They tested me for TB. I tested positive which was very unusual for someone my age. The doctor put me to bed and I didn't get to Mount A that fall. I was in bed for three months. I was not supposed to get out of bed ‘till Christmas time, not even to go to the bathroom. That was a drawn out process. I didn't get to go to Mount A, but I went back to the Lodge that next summer and went to Mount A the following fall.

(Pineo Lodge and Pagweak Tearoom) were only open in July and August because we went back to school. The furniture would be tables for two people to four people. We put tables together for larger groups that came in. The memory I have is wooden chairs, old chairs. The chairs were black. [The chairs were made by Nova Scotia furniture makers called Stickley according to Thelma.  She might have meant Sibley.] I don't remember if they had linens and cloth napkins. [Thelma said there were no tablecloths when she did the laundry.] We must've had placemats. We didn't have a uniform. I concocted my own. I used to work at Alma's tourist home. I worked there one summer. I waited on tables, washed dishes, peeled vegetables. I wore black pants and a white shirt. I probably wore the same thing at the dining hall. Can't remember what the girls wore.

Alma supervised us because she was the senior person there at the time. The manager was up in the Lodge. I don't remember the manager coming in much to keep us on the straight and narrow. Alma had lots of experience working with tourists.

In the second year, I worked in the dining hall. A woman from Amherst who lived on Victoria Street was hired, and she decided she was going to make the place pay. I suspect that Cyrus ran the Lodge and the dining hall as a tax write off because it wasn't making money. One of the ways she was going to economize was she was not going to allow the staff to eat the dining room food anymore.

I was instrumental in organizing a protest. The board, the advisors, was having a luncheon that day. A man who was on the board and who lived in Amherst was hosting a luncheon, so we decided that [the woman from Amherst] didn't back down, we would go on strike, and there would be no luncheon that day. The one thing that we had made clear was I was going to do the talking to the manager, so when we traipsed up to the lodge and announced that if we were not going to have the regular food and would have to have special food that we would not serve the luncheon. We were going to go on strike. We must've got our way because we did serve lunch. The next morning she fired me. I feel sorry for the new manager in retrospect.

Then Mrs. Webb, Cyrus's sister, who lived across the street, hired me as a gardener and maintenance person. This was toward the end of the season. Being her gardener was not very complicated, and I got much better pay. I mowed the lawns and carried firewood to the guest rooms. All the rooms in the lodge have fireplaces. At that time Leo Jamison was working for Eva Webb on the farm at Pugwash River. He was my boss and he would keep an eye on what I was doing. Leo was the one who helped me if I had any trouble with the lawnmowers. We did not have much interaction with Mrs. Webb.

[There was] a widow who must've worked in the dining hall or the kitchen. They used the Staff House for break time when the dining hall was closed down in the afternoon. I rushed upstairs and burst in on her at the staff house to announce that I had been fired, and she led a shriek out of her. She was in a slip or something. I said, “Oh come down. I've seen lots of women in their slips before. I do remember that incident.” I feel sad when I see the staff house all falling down.

Thelma explained The Tuttles lived on in the Staff House on the corner. George Tuttle was the president at a college in Victoria. His father was born in that house. Thelma's Uncle George’s first wife was a daughter of old Tuttle.

Cyrus in 1955 had a few small conferences. I didn't pay much attention to what was going on up at the Lodge. I remember when Senator Charles Eaton came. A woman who drove for him, his chauffeur, accompanied him. In those days the suspension in cars was not what they are today. He was a very big man. He would get in to the back seat and the car would tip his way, and his driver who was a big woman would get in the driver side and then the car would level out.

I remember when Cyrus would come.  He would usually only stay one night, and then he would go on to his summer home near Chester.  He would give us a one-dollar tip.

I have quite vivid memories of when I was gardener of the rooms at the old Lodge. I remember going into the rooms. I must've been involved in the opening up.

Maybe it was in 1955 that I worked as a gardener. I worked there in 1955, 1954, in 1953. I was the only male. It was almost like I was a maître d', but I wasn't a maître d' in the classic sense. We must've had a hostess in the dining room. I can't remember clearly. Greta Dow was a teacher and she taught me. Maybe she was the hostess and the organizer. She taught me in school. She was older than the rest of us. [Greta is 91 now.]  [See her interview under staff stories.]

I remember the train coming in on the tracks at the station. The cocktail lounge, the accommodations for the secretaries.  I used to ride on the train with Thelma’s uncle.  When Cyrus started the peace initiative, people stayed with the locals.  It was not unusual to see Chinese people walking about the town.

I have always been an innovator. I was very active in the Youth Group in the church, but I'd never thought about going into theology. I would've been at Mount A that year for the Dean to know me. That would be 1955. They came and persuaded me to go into theology, so the next summer I was on a mission field. I was there for two summers. Then they sent me out West and I was there for another two years.

Everywhere I have gone, people would ask me (about Pugwash) and its focus on peace. I've lived in the United States in the West for 10 years where I had wanted to go since I was ten.  Later I lived in Africa. I would be amazed that people knew about Pugwash.  They asked what the local people thought about the peace conferences. When I was at Pine Hill, they required theological students to give a public oration it was a competition. You could choose any subject but it could not be religious. I chose Cyrus Eaton's life. I entitled it Cyrus Eaton, A Measure of Success. I researched his life and his career. I delivered this public oration in the hall at St. Andrew's Church in Halifax. I tied with another fellow for first place. So I was able to answer who Cyrus Eaton was when people around the world would ask me about him. I was very involved through college with the situation in the Middle East. I've made 12 trips as of this year. I just finished reading a book called the Dismantling of Israel. If they continue their current policies, they are dismantling their dream, what they had hoped to have. So I've been very much involved. I was in Nicaragua during the Contra Revolution supporting the Nicaraguan people.