I grew up here in Pugwash.  When I was finishing university, Donnie Jamieson asked if I wanted to work at the Lodge, so I bought a nursing uniform.  This was 1989, the end of the Cold War.  I was studying anthropology and then I went into education.  I asked Ramon Bourque and then Mrs. Eaton if I could listen to the discussions during the conferences.  The Russians, the Americans, the French were all working here to try to come to some agreement. What I remember is the conference attendees were very genuine.  One of my fondest memories would be to stand in the dining hall and watch the delegates.  I always memorized what they wanted for breakfast.  The gift of being here was meeting people on a very human scale.  When people come, they say there is something about this place.  That was the magic of it.  There wasn’t any press.  They were free to speak.

I think it's important to teach the students to be proactive on the little things that they can do.  There's a saying if you don't stand for anything, you fall down. If you don't know your history, you tend to put pressure on the next generation. If you plug into the news stories, you will get depressed.

Sandy Butcher said, "Very pleased to finally meet Teresa - she not only ensures Thinkers Lodge National Historic Site runs smoothly with a great team of people, but she also does so much to help students (including our own ISYP students) better understand the legacy of what happened here - and she has 2 wonderfully playful dogs who know how to have fun."

Maya Fillmore served as an intern over the summer of 2016 and worked there in 2017  A world traveler, Maya is a serious historian and brought her passion to the job.  During the school year she is involved in historical reenacting events.  She gave tours in French and English, helped set up events and bartend.  She enjoyed creating creative promotions for events at Thinkers Lodge.  She isstudied history at Mount Saint Vincent University and lives in Dartmouth, NS. In 2017-2018, she taught school in Istanbul, Turkey.

Quintin Merlin was an intern at Thinkers Lodge during the 2015 & 2016 summer.s  His grandmother, Violet Williams, explained in an interview in 2010 how important it is for the young to know about Thinkers Lodge and for them to take responsibility.  After Quintin graduated from high school in June of 2015, he began studying Mechanical Engineering at the University of New Brunswick in Fredericton.  He and Caleb Pye engineering a boat out of cardboard to compete in the first annual Harbourfest race.  In addition to being history enthusiast, he led tours, set up for events, and bartended.  In 2015 he was awarded a prize for his essay on Cyrus Eaton. 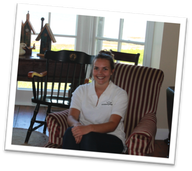 Jenna Rushton is from Oxford, NS. After completing two years at Nova Scotia Community College, she is attending Mount Saint Vincent University  to study her Business Administration. 2015 was Jenna's second summer at the lodge. She worked as the Programs Manager at the lodge and is a member of the Thinkers Lodge Infrastructure and Scheduling Committee. She currently works for the Corrections Services of Canada.

Georgina Eagleson, a pre-medical student in Scotland, was an intern at Thinkers Lodgein the summer of 2015.  She is pictured here with her mother, Jasmine, who also volunteers tirelessly giving tours and organizing events like the bonfire gathering of Pugwash high school students with the International Pugwash Students.

Teresa Kewachuk and her sister Joanne continue to enhance the landscaping of Thinkers Lodge as well as giving tours and volunteering with numerous events.  Joanne's husband Michael work on the renovations and painting of the exterior of the Gate House aka the Staff House. 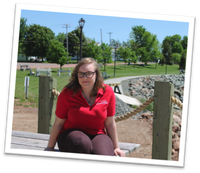 In 2014 Jacqueline Lemay was a summer intern from Vienna, Austria, and has just completed her second year of archaeology at the University Of Glasgow. She will be spending three weeks volunteering at Thinkers Lodge and learning about its history, as well as that of Pugwash. 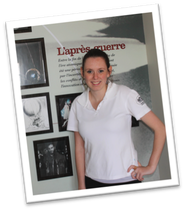 In 2014 Carly Morrison, a local girl, returned to the Thinkers Lodge for her second summer after finishing her first year at St. Thomas Universtiy.  This year she was working as Program Officer promoting and organizing school tours, visits from the public, as well as planning and organizing other group events.  In 2013 she attended the PeaceMakeHers camp at the lodge and now helped to plan the 2014 PeaceMakeHers camp.  She was also in discussion with the Canadian  Pugwash group to help organize an event in 2015. 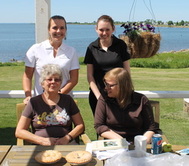 The 2014 summer interns (Jenna, Carly, and Jacqueline) have been busy giving tours, getting the dining hall ready for functions, setting up the gift shops, contributing photographs and films to our archives, and getting Thinkers Lodge ready for the summer season.

Cathy stayed for three weeks to continue the oral histories and meeting with Teresa Kewachuk's Global History students at the high school to incorporate their interviews into our website.

Cathy also cleaned out the interior of the Gate House (formerly called the Staff House).  We hope that funds can be raised to restore this building. Perhaps it can be used for retreats for artists or writers who would be inspired to create as they absorb the beauty of the Northumberland Straits.

In 2013 for 7 weeks, Elizabeth Eaton graciously volunteered her time and coordinated programs, supervised interns, toured guests, hosted weddings and kept Thinkers Lodge running smoothly.  She met with organizers of PeaceMakeHer Camps.  Her presence graced the Lodge.  Elizabeth has always sought to bring peace to her surroundings.

Cathy Eaton, granddaughter of Cyrus Eaton, began this project in 2010, did many of the interviews, took photographs, and created the website.  She has been an English teacher for many years and has written two books.  Curse of the Pirate's Treasure is set in a small fishing village in Nova Scotia much like Deep Cove where she visited her grandfather every summer.  Snags and Spills is a collection of short stories.

Cathy is pictured here with her brother, John.  A Pugwash Park Commissioner, John has been the inspiration and the drive to restore Thinkers Lodge to once again become a place to gather and promote peace and improve our world.

Adele Wick, who visited Cyrus Eaton in Deep Cove for several summers, joined Cathy in 2010 and helped with the interviews.  She taught economics at Tulane University and edits books for economists. She is working on a book of stories based on Cyrus Eaton.

Mandy Jamieson from Wallace helped record the interviews and spent many laborious hours transcribing them.

Susie Chou documented the interviews with her marvelous photographs when she visited Thinkers Lodge in 2010 as a presenter in the Women and Peace Conference.  Her father, Chou Pei-Yuan, attended the 1957 Pugwash Conference as a delegate from China.

Susie is pictured here with Sandy Bouchard with a 1957 photograph of her father and Cyrus Eaton between them.

Paolo Brenciaglia contributed photographs.  Grandson of Eva Webb (Cyrus' sister), he has lived with his wife Sandy in Pugwash for many years and has been integral in creating the Margaret King School Memorial.  Paolo is pictured here at the Memorial. 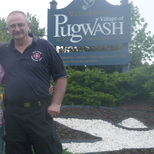 Peter Eaton, grandson of Cyrus Eaton, reviewed the video of the fire of Thinkers Lodge and captured the stills used.  He is a volunteer fireman and works for a news station in Halifax.  He lives in Nova Scotia. 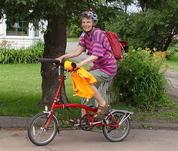 Vivian Godfree is a member of the North Cumberland Historical Society.  With their help, she contacted many of the residents to interview.  With Thelma Colbourne, she helped interview Pugwash residents. 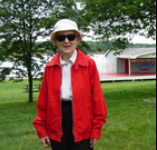 Thelma Colbourne is another member of the North Cumberland Historical Society.  Her grandfather built The Empress Hotel.  In addition to giving a wonderful interview, she worked with Vivian Godfree to conduct interviews. 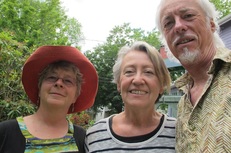 Cathy Eaton visit artist couple ﻿Susan Tooke﻿ and Richard Rudnicki.  Susan was the illustrator of the book B Is For Bluenose as well as the artist who illustrated the poster for the 2010 Peace Conference For Women celebrating Anne Eaton and Ruth Adams.  Richard is writing and illustrating a children's book on Cyrus Eaton that is due out in 2016.