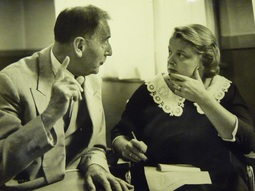 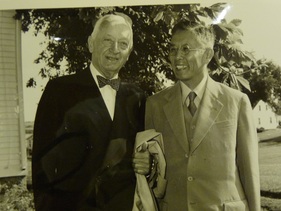 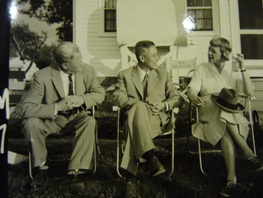 Ruth Adams serves as secretary to conference.
Sandy Butcher recounted how Anne Jones wrote a letter to her father, Judge Kinder, on 12 July 1957 about the 1957 Pugwash Conference.  In it, she gave lovely descriptions of the participants.

She described an outrageous croquet match between Eaton, herself, and two of the Soviet participants, Topchiev and Kuzin.  (Jones was in a wheelchair, and she describes Topchiev seizing her wheelchair and pushing her down fairly rough terrain at a speed she called ‘breathtaking.’)  She describes the ‘first encounter’, as she called it:

…you can visualize their first encounter with each other in the big room overlooking the strait.  It had the feel of a railroad station waiting room, full of silent strangers.  Some, of course, knew each other; many were known to each other, had even corresponded, but the only common denominator was Russell’s invitation.  So the gathering of scientists from both sides of both curtains for the first time since Hiroshima, to assess in Russell’s words, the hazards of the nuclear age, was absolutely still.  For minutes.

Szilard began, ‘We find ourselves in a situation very like that between Athens and Sparta,’ and he stopped to allow for the whispered translations.  Yukawa told his nephew and the other young Japanese.  They nodded.  Pavlichenko explained to the Soviets and Danysz; they nodded.  Lacassagne arched an eyebrow and looked pleased.  Meanwhile, Oliphant’s John Bull face was beaming and Chou registered amusement.  Thirring nodded earnestly.  The British and Canadians looked relieved, and the Americans, native and foreign born, relaxed.  It was unanimous.

I must mention the marvelous change of atmosphere here as though early on these men decided that although they might not trust each other’s governments, they could trust each other.  When I mentioned this to Leo Szilard, he said, ‘Hah! Who trusts his own government let alone someone else’s?

The meeting ended, the word of the meeting’s success spread across the world.  Academies of Science in different countries supported the work.  And the groundwork was laid for a new organization.

(As a footnote to history, Rotblat said that Eaton called him up after the meeting to see if he would help arrange details for Eaton to wed Anne Jones in England.  This fell through in the end, because they were able to marry in the States.  But Rotblat was clearly tickled by this bit of romance.)

Anne Eaton was a complicated women with many passions; she was articulate and she cared. She made a difference. Sandy Boucher detailed the contributions of Anne Eaton and Ruth Adams in her presentation, "The Women of Pugwash." Sandy spoke during the 2010 Mount St. Vincent/Thinkers Lodge Conference on Women and Peace.