Raymond Zacharie Bourque (September 11, 1917 – May 31, 1998) was a Canadian politician. He represented the electoral district of Yarmouth in the Nova Scotia House of Assembly from 1953 to 1956. He was a member of the Progressive Conservative Party of Nova Scotia. Raymond Bourque was born in 1917 at Sluice Point, Yarmouth County, Nova Scotia.  He married Bernadine Mary Belliveau in 1940. Bourque entered provincial politics in 1953 when he was elected in the dual-member Yarmouth County riding with Progressive Conservative William Heartz Brown. Both Bourque and Brown were defeated when they ran for re-election in 1956, losing to Liberals Willard O'Brien and Eric Spinney. Bourque also worked on the Canadian Pacific Railway. Raymond and Bernadine moved to Northfield, Ohio and had seven children.

Cyrus Eaton donated the property of Thinkers Lodge, the Gate House, and the Lobster Factory to a Nova Scotia non-profit incorporated by an act of the Legislature introduced by Raymond Bourque.  Cyrus Eaton contacted Bourque, who agreed to come work for Eaton in Northfield, Ohio.  In the summers, he worked at Deep Cove, Nova Scotia, and he oversaw the details of the staff at the many conferences at Thinkers Lodge in Pugwash, Nova Scotia.  He was so much more than a butler who served meals.  He was pivotal to the success of the conferences, helped hire staff, oversaw the wait staff, created menus, and made sure the guests were comfortable and treated royally.  He played the guitar and sang and participated in skits at the Lobster Factory with the rest of the staff.  In the evenings after work, he often worked on model clipper ships.  One that he built resides in the Great Hall at Thinkers Lodge.  He stayed in The Staff/Gate House on the property usually with one of the chefs.
​
He was loyal, dedicated, and a friend to Cyrus Eaton. Raymond had a marvelous sense of humor and was a constant companion of Cyrus Eaton.  After Cyrus Eaton died, he worked for Anne Eaton at The Last Resort in Florida.  Bourque died at Northfield, Ohio on May 31, 1998. 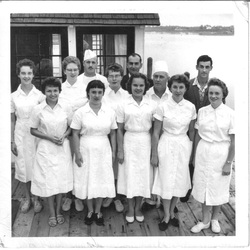