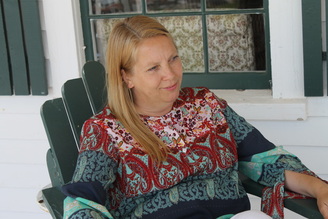 Teresa Kewachuk is guiding her history students as they interview folks about the Cold War, the Cuban Missile Crisis, and the Berlin Wall. 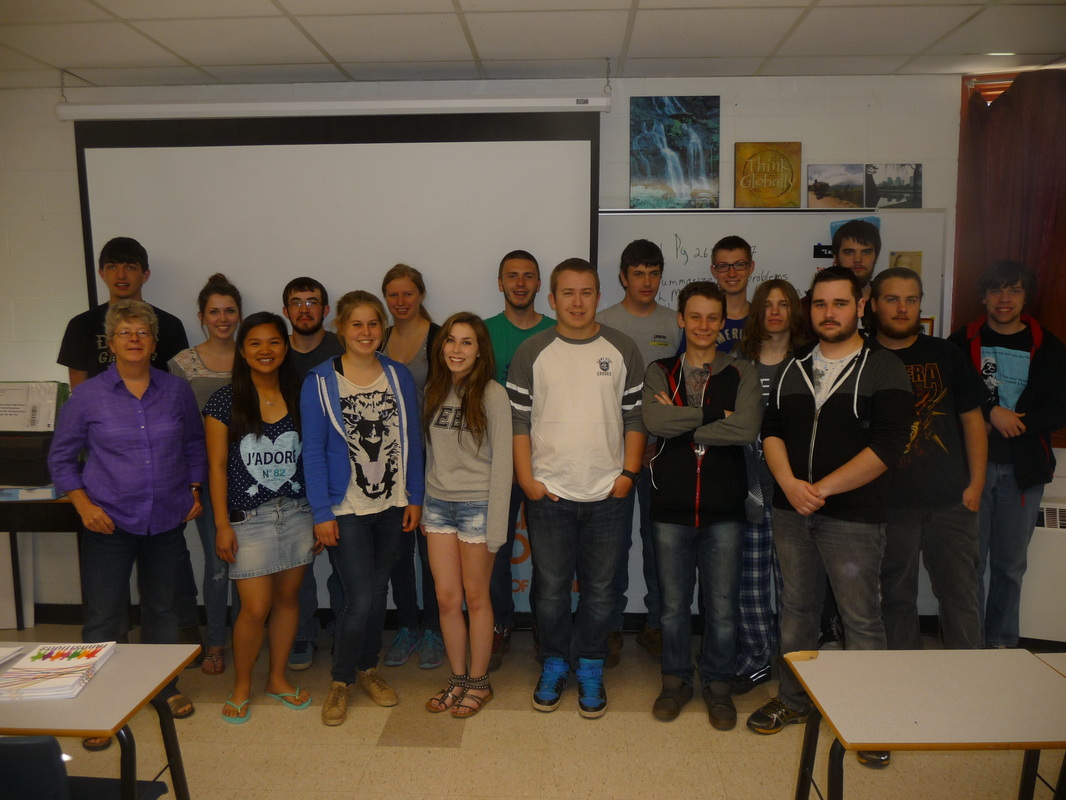 Calvin Elliot, who will be attending SMU for engineering in the fall, discovered how important Pugwash really was to the global community in working towards disarmament and peace.

Calvin loves snowboarding.  He believes that it is important to capture the history of Pugwash while people are around to tell it.

Daniel McLearn, who will be taking Applied Sciences at Acadia University, reflected on how the “people of Pugwash created a very homey welcoming environment; this allowed the delegates to relax and open themselves up and express their views.”

Daniel grew up outside Wallace.  Much like Cyrus Eaton, he believes that outdoors and physical activity are very important.

Emily Flynn noted  that "the residents helped make the conference successful by offering a place to stay in   their homes for the delegates, and working and helping out at the Thinkers Lodge."

Emily plans to go to St Thomas University in the fall, and take her Bachelor of Arts.

Tim Tuttle explained how “Pugwash was a quiet, little village; there was little media attention and scientists from both sides of the Iron Curtain were able to meet without fear of being jailed or killed.”

Timothy lives on a beef cattle farm, plans to take Heavy Duty Equipment Truck and Transpot Repair, and then intends to return to the farm after college.

William Blaikie  who plans to apply to pharmacy school at Dalhousie University after his first year at Acadia, said “I didn’t realize just how revolutionary the conferences were.  In a time when open communication between residents of “enemy” nations was almost impossible and discouraged by governments, Pugwash broke down the barriers between enemies and brought people together from all corners of the globe to have positive discussions and form friendly relationships.”

William is an avid golfer, who enjoys music and plays several instruments including guitar, banjo, mandolin, and harmonica.  He enjoys snowmobiling in the winter. 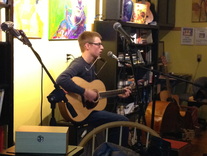 William performed at Chatterbox Cafe.  He sang and played both the harmonica and guitar.

Camille Bertoux, an exchange student from Belgium, explained that this course “made me aware that there are too many nuclear weapons in the world and that they don’t solve any problems.”

One of Camille's goals was to learn English.  She had an amazing experience and will be sad to leave Canada at the end of June.

Justin Brownell added, that the nuclear weapons “could be used to destroy life and the world itself.”  He said that the project has changed him, showing that the world could be here today and tomorrow" because of the massive destructive capacity of nuclear warfare.  Justin has decided to take a year off from school to work.

In the future, Justin hopes to work in a sports field.

Hayley Jamieson, who plans to attend art college and hopes to help build homes and schools, said that “Pugwash played the role of the peacekeeper.”  She thought it was amazing that "Cyrus Eaton, a man from our very own town, decided that he wanted to make a difference and offered Thinkers Lodge to scientists from BOTH sides of the iron curtain, and that he paid for the conferences."

Melanie Sprague, who will be attending Holland College for their pastry arts program and hopes to own her own bakery some day, “found it inspiring that so many people from the community took the time to help out during the first Pugwash Conference.”

When asked how she wanted to make a difference in the world, Wenzy Rose Belmes wrote, “I have always wanted to travel the world and in my travels I plan to help build schools, hospitals, and homes. I also want to be a member of 3 or maybe 4 different organizations that focus on helping people in third world countries. I want to help fund raise, raise awareness, help give fresh water, and help children get to school."

Justin Langille lives in Pugwash Junction where Cyrus Eaton lived when he attended school and was taught by Margaret King. He explained, "This project has gotten me to view myself as a Pugwash Historian because of the information I've helped gather for the Pugwash Thinkers Lodge website."

He plays guitar and is pursuing a career in Culinary Arts. His biggest plan right now is to go to college to be a chef, but he will work for a year first.

Breanna Rose will be attending Acadia University to study business. She enjoys cooking and baking.  She went to Italy in 2013 on a school trip.

She was impressed that "Joseph Rotblat was able to leave the Nobel peace prize anywhere, and he left it to Thinkers Lodge as that was where the first conference took place.