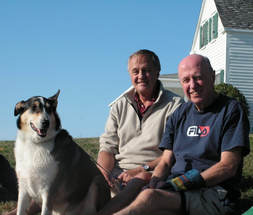 Tell me about your grandmother.

Eva Ruth Webb (sister of Cyrus) was Paolo’s Gramma.  “She had a huge heart, was very determined, and she had very little diplomacy.  She called a spade a spade.  She had kind of a toughness if someone tried to take advantage of her.”

“One example is a family from Cleveland came after the conference to see the lodge.  She saw them snooping and said can’t you read.  She had posted a sign saying No Trespassing.  They had wanted to take a look at the lodge.  They claimed they were friends of Cyrus Eaton, but they had no idea where he lived.  She sent them packing.”

“Gramma always avoided the States; she not like the States very much.”  On one trip, Paolo wanted to drive through the States.  They left Pugwash early in the morning.  The custom guy asked if she had anything to declare.  “Yes, my brother is Cyrus Eaton.”  Do you have anything to declare.  “I am not stopping in your damn country.  I am just passing through.”  When they were Near Buffalo, the custom man wanted to know if she had anything in the trunk.  She told Paolo just to drive.  He followed her directions but saw the custom man go to draw his gun; but then he just waved them through.

“She taught me a lot.  She was very practical.  I spent the summer with Gramma when I was 14.  She told me, ‘You are a nice young man, but you are spoiled rotten.  By the end of the summer, you will thank me.’  She worked me to the bone.  I did just about everything she asked.  She taught me how to cook.  On rainy days when you couldn’t cut lawns, she taught me how to hook rugs.  Then she taught me to darn my socks.  Gramma was straight-laced.  She drank a sherry now and then and didn’t smoke.”

Tell me about your grandmother’s family.

Billie (Dorothy) Webb a spinster after a short marriage lived with her mother, Eva Webb.  “She looked out for Gramma.  She lived in apartment behind house above garage.”

“Billie was the most friendly of all the aunts; she drank a bit; she was avant-garde and loose.  She cooked, cleaned, and was a companion.  She mingled well with guests.  The delegates liked her a lot.  She was friendly with the staff.  She smoked a lot and liked scotch.”

“My mother, Winnifred, was the eldest, then Aunt Evelyn, then perhaps a son (Howe) who left for Australia on the Lithuania (a ship that sank).  Some of his descendants visited from Australia. The next child was Margaret (Monte) and then Cyrus (Sonny) who died in the WW II in Germany, and finally Billie (Dorothy).  Gramma was married to Truman Webb.”

When Paolo first arrived to visit, he asked, “What about my grandfather.”
“Gramma went stiff.  She said, ‘I suppose you entitled to know.  But don’t ask too many questions.’  They moved from Pugwash to Edmonton in 1903.  They were fine until the first World War.  When he came back, he was shell-shocked and he became an alcoholic.  Gramma said, ‘It’s the bottle or the family.  Take your pick.”  Gramma packed up the whole family and moved to Geneva.  That’s how my mother met my father.”

“Her neighbor was ambassador to League of Nations.  Aunt Monty was in Rome studying Italian.  The whole family went to visit her.  They were having tea and some people were dancing.  Mario presented himself by clicking his heels and introduced himself.  He refused tea but wanted to dance.  He picked Winnifred, but he had to come Pugwash to convince her to marry him.  Gramma had moved back to Toronto and came here in the summer 1932.  The house in Pugwash was not winterized.  She lived in a Toronto house that Grampa owned.”

“Mario Brenciaglia was a typical aristocrat.  He was almost totally deaf.”  Paolo had strong and high-pitched voice, so he could hear him.  “He wore a hearing aid.  He took Paolo along and called him my little secretariat.  He had determination.   He knew what he wanted.  He was a lawyer.  First, he was a criminal lawyer and then a civil lawyer.  He was an agriculturalist.  He grew olives and produced olive oil.”

Gianni (Giovanni) finished high school and Paolo had more year.  Aunt Florence offered to send Paolo to Oxford.  Johnny got accepted in second year at McGill.  Paolo decided he wanted to go to McGill. So he could skip last year of exams. His mother wrote to Uncle Cyrus who got Paolo accepted.  Gigi (Luigi) came the next year but didn’t like it (at the university or being away from Italy.)  Paolo was 16 and thought he would go into medicine.  Turned out, he couldn’t stand biology or zoology orchemistry.  He didn’t like to dissect the frog.  So he decided to major in math. Gianni majored in physics.

What was Eva Webb’s role at Thinkers Lodge.

“Gramma had someone run the B & B.  She opened the lodge, hired the workers who fixed it and painted in the spring.  She hired the staff for dining room and the lodge. She was organizer and participated in lunches and dinners.”

“She hired Lieb Blanche who was a character.  She lived in Amherst but was born in Scotland.  She was not married and had no children.  Donnie Jamieson was in charge of the dining room, and Lieb Blanche took care of The Lodge.”


The first conference Paolo came to was the 1956 one on education.  Cyril James organized the first conference and invited presidents and deans of Canada and US university.  Paolo was 16.  He didn’t get paid to work that summer.  He built the tennis court, cut the grass with a hand lawn mower, served drinks and passed hors d’oeuvres.

Who were the staff members and what were some of their jobs?

Donnie Jamieson hired about four waitresses.  Raymon Bourque came up from Deep Cove.  He was jack of all trades.  He was distinguished and very friendly.  He was a politician.  He served in the dining room as a butler.  Raymon was chief PR person during meals and cocktail hours.  He made all the guests and staff very comfortable.  He was in charge of the two chefs from Canadian and National Railway. Morash was the one with the mustache. The other chef was . . . The food was excellent.  Raymon at the end of the one of the conferences during the lobster feast asked Paolo if he liked lobster.  Paolo broke the record for eating the most lobsters.  He ate more than 15 lobsters.  He had a great sense of humor and told lots of jokes.  He knew everyone in the village.  If anything was missing, he would make a few calls, and it would get returned.

There was great affinity between Uncle Cyrus and Raymon.  He thought Uncle Cyrus was very fair and very good to him.  They were almost like friends.

“I thought Anne was great.  She was super organized.  She seemed to be liked by the delegates.  She had a very good diplomatic approach to socializing.  When she had something to criticize, she was funny and cutting.” Paolo helped her with the wheel chair and helped set up the croquet.

Paolo mingled and filled up the drinks.  Paolo’s job was to make sure they were comfortable.  Paolo rang the bell in the great room to gather people ten minutes before the meal would be served in Lobster Factory.  “I just liked the discussions.”  I was working til 10:30 at night, and I was in charge with closing the bar.  The staff came to finish the transcripts.  They would want a drink to help them.”

Ray Szabo worked in the little office.  Marilyn and Barbara stayed in staff house and did their transcriptions in the staff house.

The two rooms (library and Ray Szabo’s office) were made into one room in the early 1970s.

Ray Szabo was very prim and proper, a nice fellow and good secretary.  Guests were impressed by personal treatment.  Before he went out to greet people, Uncle Cyrus and Ray Szabo reviewed personal details about the guests, so Uncle Cyrus could be chatty and personal.


How did living with your grandmother and working for her and at the conferences change you?

“I became a lot more mature and more independent. I used to be fairly quiet which was based on shyness.  After meeting so many important people (and finding them so nice and human), I got over his shyness.  I became more loquacious.  I stopped being afraid of his father who ruled the roost.”

I met one of the nuclear scientists who was about 76 to 80.  I was hotshot tennis player.  He asked if I wanted to play tennis.  He cleaned me: 6-4.  He kept using my power to have great shots.  I looked a lot tired.  He said, ‘I have to tell you that I was in the David Cup team.  Would you like to play again?’  I said, ‘Yes, yes!’  He had a super serve and perfect lobs.”

Did you meet any of the scientists and what were they like?

“Cecil Powell was very interesting.  He was friendly and not standoffish.  He was a super gentleman. I talked to Joseph Rotblatt after the conferences.  He was great.  Very friendly and accommodating.”

Do you know anything about the history of Thinkers Lodge?

Pineo Lodge (built between 1815 and 1820 or 25) was owned by Seaman who was founder of Pugwash.  There was a lawsuit with Pineo who won.  He got the house by 1850.  He was well-known politician before the formation of Canada.  He was connected with one of the first prime ministers: Tupper.  Canada became a country in 1873.  In 1860, Henry Jr. married a Seaman and they added to this lodge.  Around 1890 a Clay family (who owned brick yard factory) took it over.  In 1929 Grampa took it over.   Uncle Cyrus bought it as B & B.