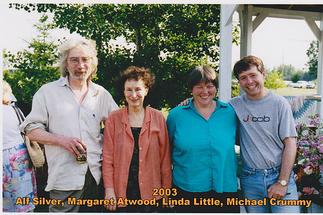 Margaret Atwood’s mother, Margaret, also worked as a pastry chef at the Pagweak Tea Room now called the Lobster Factory. The author was featured in Read by the Sea in 2003 reading from Oryx and Crake.
Pastry Cook at Pagweak Tea Room

“I do remember the summer my sister, Margaret, worked as “pastry cook” at the Pagweak Tea Room.  She was taking a two-year course at Mount Allison University, in Household Economics, and I believe this was the summer “in between.”

At the end of the summer job, my other sister, Kay, volunteered to fetch Margaret home.  Kay was teaching High School (English and German) at the King’s County Academy in Kentville.  Kay shared an apartment with three other girls – including Clara Meek, who was always ready for an adventure.  Neither Kay nor Clara had a car, but Kay had a driver’s license.  Also, she had bought a green umbrella tent with money from her first earned salary.  Our father, a country doctor, was a semi-invalid at the time and couldn’t go for Margaret himself, but he agreed to loan his car for the purpose.  Kay and Clara invited me to join them, and so we set off from Kentville to drive to Pugwash – a long and exciting adventure.

This was the time of the Great Depression, so we took the tent for our overnight accommodation.  We couldn’t afford to stay at Pineo Lodge, but hoped to be given a place to pitch our tent, as we could never have made the trip there and back in one day!  I’ve read that the speed limit for a Model T Ford in 1929 was 45 miles an hour.  We were in a Chevrolet, but it is certain we never broke that speed limit.

I don’t remember the events of the actual drive, or the length of time it took, but I do remember how great it was to have Margaret home again, for a few days vacation, before the school term began again. All her memories of that summer in Pugwash were happy ones  “

Margaret Killam was born in 1909 in the Annapolis Valley of Nova Scotia. Her father was a country doctor, and she grew up as a socially shy but physically brave tomboy. Unlike her academically brilliant sister, Kae, she was not a natural student. Her father refused to send her to university because she was "frivolous," so she taught school, saved the money for her own fees, and won a college scholarship, just to show she could.

In 1935, she married Carl Atwood, who'd fallen in love with the sight of her sliding down a banister. They spent their honeymoon canoeing down the Saint John River in New Brunswick, then headed for northern Quebec, where my father ran an insect research station. They lived in tents, then in a cabin built by my father, where my mother raised two small children without benefit of electricity or running water. The winter months were spent in Ottawa, but my mother preferred the bush. She hated hats, tea parties, and housework - in the woods she "just swept the dirt out the door" - and loved swimming in the cold northern lakes and working in the vegetable garden where they grew much of their food. When we ran short, my mother would go down to the end of the dock and throw in a line for pickerel. http://www.theglobeandmail.com/life/margaret-dorothy-killam-atwood/article684022/   Globe and Mail March 13, 2009
Staff at Pagweak Tea House, Dining Hall, and Thinkers’ Lodge

In 1949 Dr. Garth Mundel, a retired minister,  Greta Dow served in the Pagweak Tea Room.  (Oral Histories to be added). 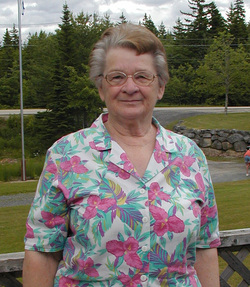 Mabel Schnare served first as assistant chef and then as head chef in The Dining Hall.  Mabel drove with Cyrus and Anne Eaton from Deep Cove, their summer home on Mahone Bay, and carried the fresh fish that her husband Roy at caught from Blandford to Pugwash for the guests to enjoy.

Donni Jamieson explained that typical evening meals included lobster one night salmon another night, and turkey another night.  She said that Mr. Eaton wanted the guests to samples some of the cuisine delights of Nova Scotia. Donnie began working at Thinkers’ Lodge in 1967.  Her husband Leo Jamieson began working for Eva Webb between 1943 and 1950. The couple built a house on and next to the foundation where Cyrus Eaton was born in Pugwash River.