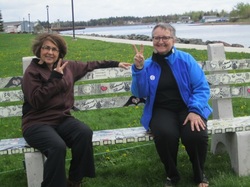 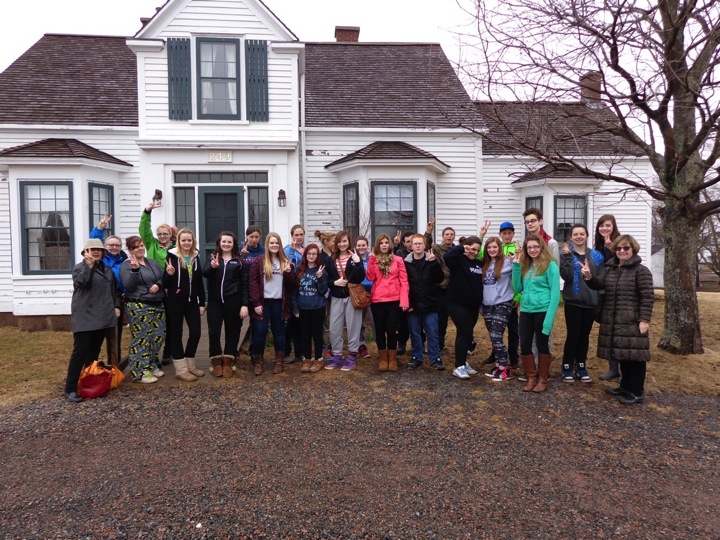 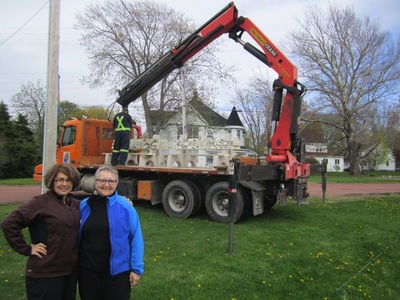 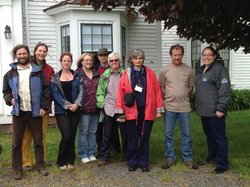 Noreen Smiley of Communities in Bloom spoke on Saturday, June 14, 2014, to a group of visitors from non-profits in New Brunswick, Nova Scotia, and PEI.

Noreen approached Louise Cloutier about a joint project with the public school students and the Community in Bloom members that would have a public art component. Louise came up with the idea using Zen doodles to decorate park benches, which would be installed in Eaton Park. Communities in Bloom arranged to purchase for benches unassembled so we got the boards in the early part of the year and the kids meanwhile worked on researching violence in the world and bullying in the schools. They research the history of Pugwash that would represent in regards to peace.

They put that knowledge together. Then they created images. There is a Bertrand Russell bench, a Cyrus Eaton bench, a Joseph Rotblat bench and a bench representing all 22 scientists who came to the first conference in Pugwash. To be able to pay for Louise went after an education grant through the teacher's union and Communities in Bloom went after a grant through the health and wellness with the goal of children doing all that research and campaigning in the school so there would be less violence and less bullying. Those people give us money. We took the boards back to Casey Concrete who assembled them and delivered them back. The day the benches arrived was very exciting with the great big crane.

Stage II will be to landscape this area. The plan is to have a circle around the benches. Peat gravel will go in. There will be a piece sign pathway with local Wallace slate that is specifically very smooth so it will be wheelchair accessible.  Right behind the benches on each side will b a flowerbed with Pavement roses because they are hardy and can withstand the salt; they are pink. We have signage already made that will be installed that will explain the project.

One highlight was our May 22nd deadline. Actually Louise is the most fantastic art teacher ever. She wanted to have the parade May 22nd at 2:22 PM in honor of the 22 scientists.  The children researched the 1960s peace marches so they re-created one in the village. It was impressive. The kids were led by the artists who all wore white and had black and white headbands and armbands matching the benches. They marched down Queen Street and brought along three grades of elementary students and teachers. They had 60 placards, and it looked very cool. It made all of the people who grew up in the 60s want to cry a little bit. They came down and ran the ceremonies and explained about why they did it and what each bench meant. They had peace quotes from all over the world. A letter was read from the secretary general of the Pugwash conferences.

It's one of the best projects I've been involved in with Community and Bloom. Eventually we hope that if we ever get enough money, we will commission a piece of art that symbolizes peace and is by a local artist.

Sometimes there's some vandalism in the park although there is not much. but there is some occasionally. The students visited the Thinkers Lodge and visited the village commission. The village clerk told them about vandalism and how we hope not to have any here. I heard from Louise that because of this initiative and some others, the teachers will implementing other projects next year to further that initiative.