Masonic Lodge Historical Information by Cathy Eaton (July 12 2017)
The information for this brief history of the Pugwash Masonic Lodge was compiled from interview with Wayne Arsenault on July 12, 2017, a May 1980 article entitled “Brief History of Pugwash Masonic Lodge,” and a 1967 book called The Development of Freemasonry in the County of Cumberland Nova Scotia 1822-1967 compiled by F. Carman Wightman of Amherst, Nova Scotia. 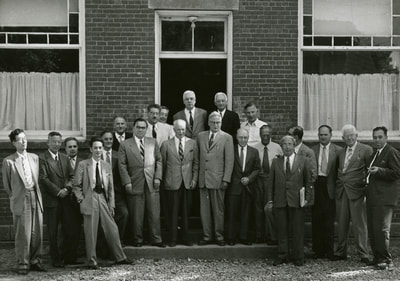 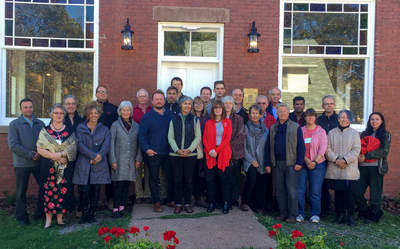 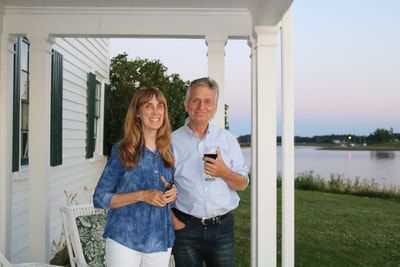 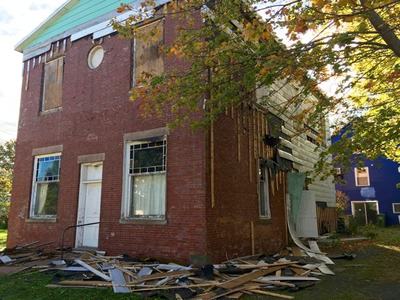 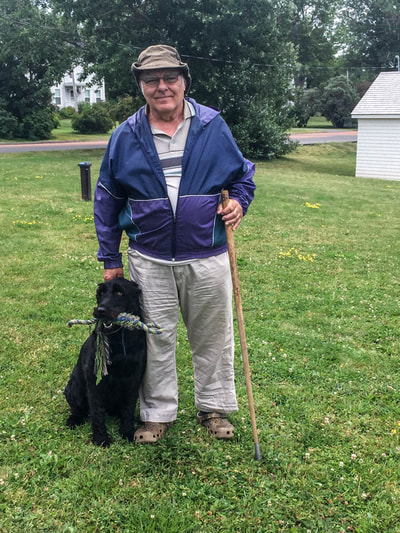 Wayne Arsenault shared with me on July 12, 2017, some of the history of the Masonic Lodge.  Wayne was born in Summerside, PEI.  He remembers taking a cruise on one of the tall ships a few years ago from Pugwash to Summerside, which helped him imagine what it would have been like to be one of his ancestors traveling on the magnificent sailing ships.

Wayne became a member of the Acadia Lodge No. 13 when he moved to Pugwash from Montreal at 32.  His father-in-law, Frank Dingle, invited him to become a member.  In Montreal, Wayne had worked for the Canadian Pacific Steam Ships, which carried passengers between Montreal and Liverpool, England, a trip that took 5-7 days.  In addition to being a shedman, who transported luggage that passengers had sent ahead to their states rooms, he traveled with his supervisor to New York City to buy tons (literally) of food supplies for their winter cruises from NYC to the Caribbean. With his wife, Beverley, and two children, he decided to move to Pugwash to distance the family from the FLQ problems, a French group in Montreal who wanted to separate from Canada. The Prime Minister, Pierre Trudeau (father of Justin Trudeau), called out the National Guard, and the situation was tense.  During Pugwash Conferences, Beverley worked in the Lobster Factory as a waitress, and her sister, Shirley, was laundered the table cloths, napkins, and sheets.  She worked at the Staff House, now called the Gate House, which is between the Lobster Factory and the Thinkers Lodge. Wayne worked at Sunset.

Wayne explained that to become a member of the Masonic Lodge, one needed to be a man 21 years of age or older, have a belief in the Supreme Being, and be nominated by a mason.  The original Masonic Lodge was on Water Street on what is now Eaton Park.  The first lodge burned down in 1910, just like the Empress Hotel and many of the warehouses, wharfs, and houses burned down in 1928 during the terrible fires that devastated much of Pugwash and cost many people their jobs.  Members can be affiliated with any religion.  Women could belong to the Order of the Eastern Star, a sister organization.  Both the men’s group and the women’s group met once a month in the Masonic Lodge.  They stopped having meetings 2015, a big disappointment to Wayne.  The minutes and important documents were sent to Halifax.

After Wayne became a member, he was elected secretary, a post that he served for 33 years. At one point, he wrote to England to get list of original membership, which he was able to obtain.  However, he was reprimanded because he had not gone through official channels in Halifax and Truro. He attended formal yearly meetings in Halifax and Truro where the men wore tuxedoes. One time, Wayne wrote Halifax where the Grand Lodge of Nova Scotia was located to assist a member of more than 50 years from another lodge to obtain the special pin with a jewel for man. Wayne was instrumental in helping this man receive the pin he so richly deserved. Wayne himself has three medals that show his membership, his office as secretary, and his role in the Order of the Eastern Star. He twice serving as the male counterpoint to the female chief, and he had responsibilities to carry out tasks decided on by the women.
At its height, there were 50 members. Wayne enjoyed the fellowship.

Wayne explained that the Masonic Lodge members raised money that they donated to bursaries, supported food banks, raised money for the community college in Spring Hill, awarded high school scholarships, and assisted families in need who approached them.  Each year their big fund raiser was a lobster supper that could serve 125 people.  At times, individual masons would contribute their own money to help families.  Additionally, the Masonic Lodge had social events, teas, and suppers for both men and women.

In 1957, 22 scientists from both sides of the Iron Curtain held some of their historic meetings at the Masonic Lodge.  After Albert Einstein and Bertrand Russell composed with 9 other scientists in 1955 the Russell/Einstein Manifesto to charge scientists from around the world to take responsibility to seek nuclear disarmament and to share the devastation potential of future nuclear wars, Cyrus Eaton invited the scientists to meet in Pugwash.  He funded their travels, room, and board.  The scientists came from Communist Russia, Germany, England, Canada, Communist China, Australia, United States, France, and Poland. Many were award Nobel prizes for their contribution to science, peace, and literature.

The final meetings of the Masonic Lodge were in 2015. The masons now meet in Wallace and River Phillip.  A similar fraternal organization in Pugwash was the Oddfellows.  Their female counterpart was the Rebekah Lodge

Wayne retired from work about six years ago in 2011 and joined the Cumberland Historical Society. He has been instrumental in photographing all the tombs in local cemeteries.  Visitors benefit from all the work he has done cataloging the names and dates of those buried in Pugwash area.

His interest in history proved very valuable to the Masonic Lodge because he is the steward of important historical documents.  He has also been a great help to John Caraberis and Bonnie Bond, who bought the Masonic Lodge last year in 2016.  Wayne said the condition of the building had deteriorated.  The floor was caving in, the staircase was coming down, and the furnace was over 40 years old.  The group’s numbers had declined, the members were getting older, fewer young men were joining, and there were no longer the funds to maintain the historic brick building.

Wayne is so pleased with the wonderful restoration work that John and Bonnie have done.  They named their building the Peace Lodge.  Wayne’s hope for Peace Lodge is that after restoration, that they will have meetings in it.  Wayne would like to see card parties for seniors, teas, musical events, and small group meetings.

The first event was on Canada Day of the 150th birthday of Canada, July 1, 2017.  Local rug hookers were featured as was a wonderful slideshow presentation of the history of Pugwash.

Background
1715 was when Masons brotherhood started.  Originally related to stone mason builders of cathedrals. Mason goes back to King Solomon which is where temple and rituals originated.
The Knight Templars were charged with taking holy land back from heathens.  In modern times,    Shriners in Boston have a center to assist burned children and one in Montreal for crippled children.

“Acadia Lodge No. 13 on the Register of The Grand Lodge of Ancient, Free, and Accepted Masonic of Nova Scotia, had its beginning in 1850.  In that year, a small but prominent group of citizens, bound by their devotion to Freemasonry, decided to petition the Grand Lodge of England for a Dispensation to form a Masonic Lodge in the expanding and prosperous village of Pugwash.”  The initial meetings took place at the home of John H. Black.  Charter members were Bro. John C. Warner, Bro. William Cooper, Bro. Jas. Ferguson, Bro. Rufus F. Black, Bro. Jas. Seaman, Bro. Wm. F. Bent, Bro. Alex Dewar, Bro. Allan Dewar, Bro. J. S. White, and Bro. Thos. Page.  Its initial number was 888, but it was changed to number 13 in 1869.

The Pugwash Masonic Lodge (Acadia Lodge # 13) started in 1850 in Pugwash, 17 years before Canada became a nation.  Pugwash was an important sea port.  The initial meeting was convened on October 23, 1850.  Acadia Lodge was one of the oldest lodges in Nova Scotia.  An older lodge was in Amherst, Nova Scotia.  The initial members were merchants, farmers, cabinet members, inn keepers, barristers, pilots, teachers, mariners, butchers, physicians, and ship masters. Members were typically in their twenties, thirties, and forties.   Dues were 15 shillings each year which was later halved for certain residents.  Two years later the Acadia Lodge became a “regular and constituted lodge”.  The Honor. Henry G. Pineo “guided the measure” to be incorporated “through the legislative council.”  Pineo was the of the original family that owned Thinkers Lodge.  In 1886 they purchased land on Water Street.  “Mr. Joseph Jones was given the contract to renovate the building which included a store as well as the Masonic Temple.”  He was paid $200 for his labors.  The formation of a lodge in nearby Wallace as well as a recession in 1880 led to declining membership.  That year they were only 20 members.

“On March 18, 1910, the Masonic Hall, with all of its furniture and equipment, was destroyed by fire.”  Fortunately, the “Warrant granted Acadia Lodge by the Grand Lodge of England in 1853” was saved. The members agreed to build a new lodge and finally chose the site on Victoria Street. “At Pugwash, the Masonic brethren have erected a substantial brick building, at a cost of $3300; the upper portion which is to be used exclusively for Masonic purposes, the lower portion as a banquet hall or to other such purposes as they may decide.” This was recorded in the Proceedings of the Grand Lodge in 1912.

Masonic Hall Being Restored by Bonnie Bond and John Caraberis;