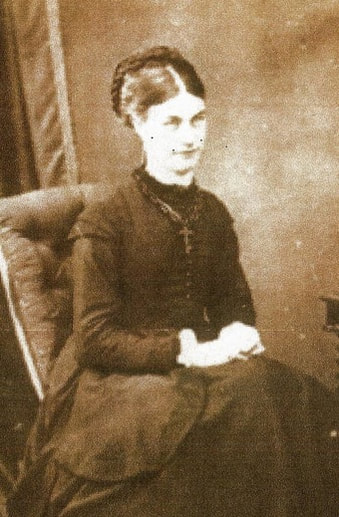 Portrait of Margaret King, courtesy of Brian Tuttle
Margaret King School was built in 1928-29. Students began attending classes in the new, all brick building in January of 1930.  Officially opened six months later on July 1, it was a magnificent school, well equipped and able to provide enhanced educational opportunities for students of rural Pugwash Junction.  The school was also open to high-school students from nearby communities: Pugwash River, Conns Mills, Hartford, Middleborough, Wallace Bay, Wallace River, Malagash and Wallace. Compared to the one-roomed rural schools that students were accustomed to attending at that time, The Margaret King School was like going to school in a mansion.
Two large classrooms dominated the structure. Each had cathedral ceilings supported by large, crossed beams. Along the north wall of each classroom were large, sliding oak doors that would fold to open into an adjoining room.  The wing off the elementary classroom opened to a well-stocked library, complete with oak tables, glassed-in bookcases and a fireplace. A fully equipped science lab opened off the high school room.
A large central hallway gave access to and from the school. The main entrance led in from the outside portico, with its six, tall, white supporting pillars. The opposite side of the hallway opened to the well-equipped playground behind the school. The hallway also led to each of the four rooms described above, as well as to two cloakrooms, four washrooms for students and teachers and upstairs to a central teachers’ room.  The latter conveniently had views overlooking the two classrooms below and the large  playground area outside.
Beneath the main floor area were rooms equipped for teaching Domestic Science and Manual Training, also a room for indoor physical activity (a gym) and a shower room.   A pump room provided running water from a drilled well for flush toilets, wash basins, and drinking fountains (a luxury not found in most rural schools and homes of that time). There was even a comfortable area for a janitor in the coal-fired furnace and boiler room.
An impressive cupola adorned the very top of the building. An inside electric light would shine from its windows, as an invitation for the community to attend when special events would be taking place.
The Margaret King School was an extraordinary contribution toward educating the young people of Pugwash Junction and its surrounding communities. It was a gift provided by the late Cyrus Eaton (1883-1979).  A former resident of the community, Cyrus Eaton, received his early education at an earlier Pugwash Junction School, a one room school located nearby. The opening of the new school in 1930 brought an end to the one-roomed school facilities where many of Pugwash Junction’s citizens had received their early education. The school was named after Cyrus Eaton’s teacher, Miss Margaret L. King. She was a special guest of honour at the 1930 opening.
In the 1960s, the amalgamation of schools within Pugwash District expanded to include all students from Pugwash Junction. Regrettably this change resulted in the closure of the Margaret King as a community school. Much of its furnishings and equipment went to other schools, for example, the new Nova Scotia Teachers Collage in Truro.
In the five years that followed, under the care of the provincial government of the day, it was left empty and more or less abandoned. Without heat and being openly vandalized, it reached a state of serious deterioration. It could no longer be used as a public building and was eventually liquidated by the N.S. Department of Education, after which it served as a storage building for a local farm.
As one who knew the Margaret King School when it so beautifully served as an educational and community centre, it was, and still is, troubling and difficult to understand how such a stately building, in such a brief span of time, was permitted to become a farm utility building. Eventually, the poor condition of the building became a safety hazard which led to its demolition in 1993. It is very sad to realize that the building, that was the Margaret King School stood empty and neglected, longer than it served as a public school. (by Sherman Williams, updated May, 2012). Sherman and Pat Williams’ mother, Violet Williams, campaigned to have the building be used for a community center.  When it was demolished, the cupola was moved to the front of her house, and her eight sons each handcrafted one of its eight windows for her.

Pat Williams Briggins Remembers Margaret King School
Interview by Cathy Eaton
Pat remembers walking into the library at the Margaret King School, which had a large book that they called the Book of Knowledge. There were long oak tables and arm chairs.  On the walls were photographs of important scientists and educators.  There was a piano, and she remembers singing around the piano. The room opened out to a staging area where they put on plays, Christmas concerts, and community socials. There was electricity and in-door plumbing, which was eight years before the community got electric power.
She remembers making for Box Socials a pretty box and putting a lunch for two in it.  Then the boys would bid on the boxes, and the highest bidder got the box and the girl who had made it, and they shared the lunch.  That was one way they did fund raisers.

There were two large classrooms (one for primary and one for the high school grades), which opened up to two large rooms: one was a science lab.  “We could perform any experiments with supplies in large glass cabinets and we had special sinks with special slender faucets.”  They had big oak doors.  She said, “The science courses were instrumental in introducing to me course work that helped me in my nursing studies.”
“We could go downstairs to the large gymnasium room.  We played a lot of games.  We did track and field.  There was a skating rink in the winter.  There was a large playground with a merry-go-round.  It had a long pole with swings.  You ran around in sync and held onto the swings until your feet were off the ground.”
Under the high school classroom was the industrial arts and manual training classroom where the boys made beautiful furniture.  Besides the gymnasium was the room for the girls to study domestic science which means cooking and sewing.  “Our teacher traveled in on the train to teach the class.  A few boys took the courses as well.”  She remembers one young lad locking the door and saying, “You don’t get out until I have a kiss.”  That was Pat’s first kiss.
“My impression was that the school got dropped down from heaven and I had that feeling that it didn’t really belong in our poor community.  It made me appreciative of Cyrus Eaton who spared nothing in dollars and care so that we could have this beautiful, complete school.”
At the top of the stairs were beautiful cathedral style windows and the principal’s office. “At grade 11, we no longer had a principal, so we were sent to his former office to study for exams.  Then on a nice summer day, those windows would open, and you could climb out and enjoy the sun and the scenery instead of studying (unbeknownst to the teacher).  I am surprised now that we were brave enough to go out on a slate roof which was steep and kind of slippery. Our marks never suffered because we played hooky on the roof.  Our grades were always in the 90s.”
The grounds were beautiful with lovely shrubs; the snowball and the honey suckle were Pat’s favorites.


Jean Thomas Shares About Margaret King School
Margaret King became Cyrus’s teacher when he was five, and she boarded with his family. He remained in her charge for eight years.   Margaret said, “He was a boy of good morals.  He was intelligent, obedient and respectful.”
Mr. Eaton named the school after his favorite teacher, Margaret King. Cyrus Eaton sent a telegram to her family at the time of her death in 1944: “Margaret King will long be remembered for nobility of character and her cultivation of mind. She was the very model of those wonderfully able, conscientious and self-forgetting women . . . who made Nova Scotia distinguished for intellectual promise."
“My father and Mr. Eaton attended school together in a one room school, typical of the times.
I recall anecdotal stories passed on to me by my Dad regarding Margaret King and the ‘good old’ school days. Sixty years later, I attended the Margaret King School and later became an educator in Nova Scotia and United States. In 1993, some former teachers and students gathered for a reunion for this school that functioned from 1930 to 1960. We are the same group, now, seeking to create an appropriate community memorial. May future generations appreciate the legacy that is being passed down to them.” (The memorial is now completed).

Excerpts from History of Margaret King School by Mrs. Margaret MacLeod
Cyrus Eaton’s “conceived the idea of building a model school… Accordingly, in the winter of 1929-30 men were engaged to search the local area for mature maple and elm trees while in their dormant stge.  When suitable specimens were found, they were carefully chopped out of the frozen ground with all their roots as intact as possible.  One particular elm was labelled ‘The Thousand Dollar Tree’.  Ten teams of horses hauled this choice specimen on a specially contrived sled to the Margaret King School lawn.  Needless to say, this feat created quite a sensation in the community!  And in the spring of 1930 eight to ten mature trees sprouted leaves and the spacious lawns had taken a giant step in their progression from an unsightly construction site to the attractive landscaped showpiece it later became.  Mr. Danson vividly recalls other outstanding features of the new school.  A rustic fence of hackmatack wood completely encircled the grounds.  The latter contained a playing field, a ¼ mile race track, playground equipment for the younger children, and a recessed rink.  There was also woodland, garden, and lawn area.”
“The school was built with the intention of providing the youth, not only of the immediate community, but also those in the surrounding areas, and opportunity to obtain an all-round education, which Mr. Eaton felt was the birthright of every citizen.”
“Mr. Eaton’s generosity did not end when he built and elaborately furnished his model school.  It is reported that he not only supplemented the salaries of the teachers engaged to teach in the Margaret King School, but he assumed its enormous operational and maintenance costs.  Mr. Eaton also provided scholarships to Acadia University and Mount Alison University for those who wished to further their education… Mr. Eaton envisioned that teachers and students alike, by living and working in this choice environment, so carefully chosen to appeal to the aesthetic senses and to feed ‘the inner man’, they would be inspired to set their sights on worthy goals and thus reach their highest potential and fulfillment. Thus, Mr. Eaton fancied the Margaret King School to be a stepping-stone to the high ideals – the stairway to the stars!”  “A credible number of Margaret King School students have commendable records as teachers, doctors, nurses, lawyers, pharmacists, scientists, military technicians, business specialists, technicians, of various kinds, homemakers, and dedicated parents turning out specialists and technicians.”