Margaret Pearl House Eaton married Cyrus Eaton in 1907, and they had seven children.  They were divorced in 1934 but lived on adjacent farms and shared custody of their children. Margaret was much loved by her children, and she became a talented painter. Below is a slideshow of photos of Margaret, sketches she made of Cyrus, a biography, and a slideshow of some of her paintings. 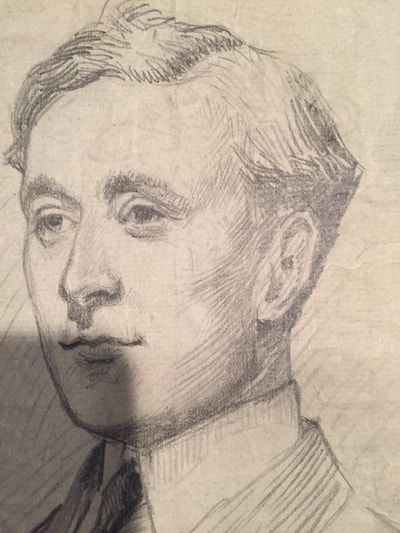 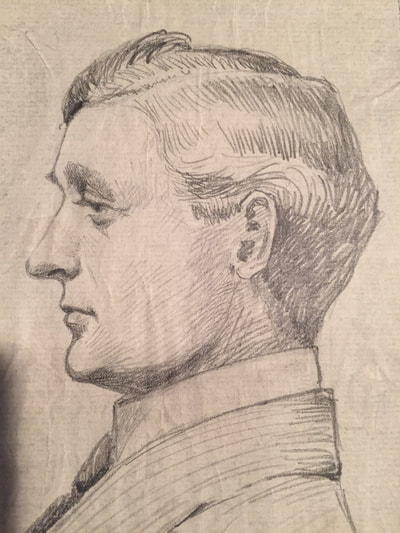 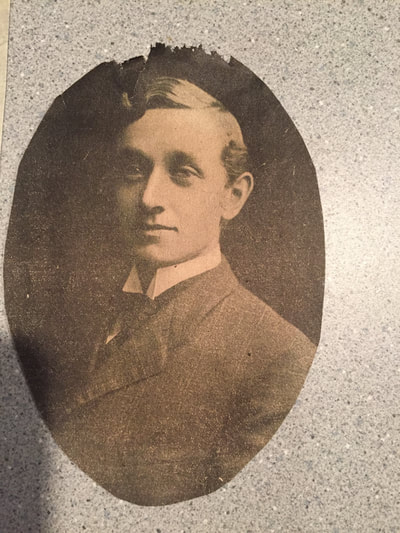 Pearl Margaret House Eaton was born on December 24, 1886 in Cleveland, Ohio, to Augustus Farlin House (10.7.1847-22.1932) and Mary Grace Cleve (b.1850 in England). They may have lived on 2020 Euclid Ave in Cleveland. In the early years she was known as Pearl, later as Margaret.  Her older sister Lillian House was born September 1874 and first married Thomas Brinsmade and later married Thomas A McNamara.  She had a daughter Isabelle with her first husband.  Augustus was a Civil War veteran, attended Oberlin College and studied medicine in Europe.  He was a prominent man in Cleveland. A brother Augustus House born in 1880 died before the 1900 census.  Possibly Augustus and Mary Grace lost two other children.  They attended the Superior Street Baptist Church.  Mary Grace Cleve was from England and was a devout Baptist. She volunteered and most likely was a hostess for social engagements.  Margaret’s parents divorced, in  and within a year Augustus married his nurse, ?, and they moved to Los Angeles, California.

It is likely Margaret had a very pampered childhood. One indication is the multitude of photographs of her from a very young age.  She attended Hathaway Brown School, a private girls’ school, and graduated in 1906 with twenty other girls. She kept a scrapbook of dances and parties she went to from 1904.  In her dance cards in pencil are written boys’ names next to dances like Two Step, Waltz, Paul Jones, dip Schottische.  She writes notes about staying over at friend’s house and being serenaded by boys.  She jots down with initials different boys she met at gatherings.  Some parties were at HB, University School, and clubs like The Colonial Club, the Euclid Club, University School, musical programs and lots of luncheons. She kept calling cards of some of the fellows.  Under Mr. John Hood Jr, she wrote, “handsomest man I ever met. On Feb 23, 19?? Pearl with other seniors was in the play Cranford.  She kept railroad tickets. She attended a birthday party at the Superior Street Baptist Church in 1904 at the Sunday School.  She kept violets picked at St. Augustine and theatre tickets, went to Atlantic City, went to Saratoga.  She attended dances at Mohegan Lake School in Mohegan, NY.  One November 17 a friend who stayed at the Hotel Belmont in New York and attended the Yale/Princeton football wrote Pearl that they had the time of their lives. She kept love letters from a man named Bruce who called her Pearl sometimes and Peggy sometimes.  Very flirtatious.  She glued in a good sketch she had drawn of a woman from the back with fancy hat and hairdo that she drew in church.  On May 27, 1905, she performed at the Euclid Avenue Garden Theatre in the Tyrolean Dance with 12 young women and 11 young men.  She went to Yale/Princeton game.  She attended La Salle Theatre in Chicago.  She went on a steamer to Buffalo.  She kept a skit she wrote about girls at a school.  In a small envelope was a lock of chestnut brown hair.  She has a newspaper article describing her mother Mrs. A. F. House’s involvement with a charity event.  Some pages had playbills.  Ironically, she went to St. Paul’s School in Concord, NY where Cathy Eaton taught in 1973 and Polytechnic Institute in Brooklyn, NY where Michael Murphy taught from 1973 to 1976.  In the back of the scrapbook are team photos of athletes from different schools and men’s colleges.  At the very end are printed poems and the final page is a spiritual essay.  What can be surmised from this scrapbook?  Pearl went to parties, dances with many boys, kept a record for us to find over 100 years later.

Clearly, her youth was very unlike the childhood and youth of Cyrus Eaton whom she married in December, 1907.  Did Cyrus’ Uncle Charles also live on Euclid Avenue.  She was 21.  He was 24.   Did they meet at a party? At church? Did they court for long?  Cyrus had graduated from McMaster University in Ontario, he had spent summers working for John D. Rockefeller from 1902 to 1905, and spent a few months working as a bronco buster in western Canada after graduation. His Uncle Charles was minister at the Euclid Avenue Baptist Church, not far from the Superior Street Baptist church the Houses attended.  I have found no record of Margaret going to college or working.  Perhaps, she took art classes because clearly she was already a talented artist doing sketches.  One photograph indicates she volunteered as a nurse.

Courtship and wedding: Cyrus began coming to Cleveland the summer of 1902 when Margaret was 16.  Possibly they met through the connection of the Baptist churches they attended or through social events.  Cyrus began working full-time for Rockefeller in 1905 when Margaret was 19. Cyrus had a brief stint as a minister at Lakewood Baptist Church in 1906. We have two sketches she made of Cyrus about this time probably from a photograph rather than a life setting. They married two years later in 1907 when she was 21 and he was 25.  I have found no mention of their courtship, their engagement, or their wedding.  She was lively, artistic, and very social.  He was reserved, focused on business, and charming. They were a handsome couple.  Cyrus’s business acumen rocketed his fortunes so that before he was 30, he was a millionaire.  For a while they lived on Euclid Ave, probably near her family, but when they moved to Acadia Farms, did she feel isolated? Their daughter Margaret G, later known as Lee, was born in 1909, Mary Adelle in 1911, Betty in 1913, Anna in 1916, Cyrus in 1918, Farlee in 1922, and Mac in 1925.  Despite 7 children in 16 years, Margaret kept her slim figure.  She is pictured riding and skating, but Cyrus was probably the more passionate athlete.  She would have been a good social hostess, and she would have known the socially elite people of Cleveland.  Some of their surviving letters indicate that he traveled a great deal.  The letters show warmth and humor, as they recount the daily lives of their seven children going to violin class, throwing a tantrum, enjoying a hayride, building a snowman.  The family traveled via ship to England and spent the summer with their parents and nannies at a lovely estate in Surrey.  Another year, Margaret took the girls to France.  She traveled to Germany.

A traumatic experience was when she and young Cy witnessed the explosion and fire at the Cleveland Clinic due to x-rays igniting.  Her good friend was killed in the blast.  Their daughter Lee suffered a dreadful back injury and was confined to a wheel chair.  Margaret and Lee were very close until Lee died at 40 in 1949.  Their daughter Anna had a childhood disease and was mentally challenged, never having the mind of a very young child.  Cyrus always provided for Anna, and in later years lived in Ontario with the three Serrat sisters. All Margaret’s children wrote her warm, affectionate letters.  Margaret was a prolific photographer and kept many photo albums of the children playing and of their travels in the western United States and in Europe.  She took home movies in the 1920s and 1930s that show snowball fights, riding, traveling in England, visits to France, and time spent in Pugwash, Nova Scotia.

Cyrus spent his summer in Deep Cove, Nova Scotia, and she didn’t. Margaret smoked and enjoyed her cocktails.  Cyrus didn’t smoke or drink. Cyrus was deeply involved in his They were separated in 1926 and officially divorced in 1934.  Farlee went to live with her sister Betty and her husband Lyman.  Cy Jr. was shipped off to Kent Boarding School.  Margaret moved to Arrow Cottage, an adjacent farm to Acadia Farms.  Neither Cyrus nor Margaret appeared in court.  The divorce basically said Cyrus was often absent and suggested mental cruelty.  It has been rumored that Mac had a different father. His name might have been Frederick Crawford, an American industrialist and philanthropist.  Mac spent most of time with his mother and missed a great deal of school due to being sickly.

On a loose scrapbook page next to a prayer “Our Resurrection” and quotation on courage by Victor Hugo is a handwritten note from Cyrus to Margaret.  No date.  “My dear, I love you too well, I believe in you too much and I know the Real You far too well, to agree with the girl with the tragic face and the tortured eyes.  The lovely girl Margaret and I must set free – the Real You the girl Cyrus married and loved – the girl whom he chose as mother of his children.  Forgive me.”

Cyrus and Margaret both engaged in various relationship after their divorce.  Her son Mac said that his mother often had boyfriends.  The children were often cared for by nannies.  After the divorce, Margaret traveled, pursued her talent as a painter, exhibited her work, and had homes in Ogunquit, Maine, Florida, Shaker Hts, Ohio, and probably California near her daughter Lee. She has a large stone home in Winchester, Massachusetts off a golf course.  For a number of years she had therapy with a psychiatrist.  She inherited moneys from her father, Augustus House.  We can surmise that she was a pilot due to a photo of her in a flying suit next to a small plane, but perhaps she was just a passenger.  On her birthday, December 24, first for her children and then for her Cleveland grandchildren, she played Santa Claus, sometimes even arriving by sleigh.  She wore a jolly mask.  She spent summers in Wolfville, Nova Scotia with Mac’s family, and she always helped them by buying appliances and clothes.  Many of her paintings are oil seascapes.  She painted the Square in Cleveland.  That painting is in the Oberlin Art Museum in Oberlin, Ohio. Some of her paintings were in galleries in Ogunquit, Maine, and others in Florida. On the obituary of Dr. Alvin W. Klein, Psychiatrist, Margaret wrote “a better man never lived.   He died on Sept 29,  1935. A companions/husband? of niece Isabel wrote, “We know what a real friend he was and what a refuge he and his home were to you.”

When she lived about Stouffers in Shaker Square, Cy Jr often had dinner with her once a week. He adored his mother.  The older grandchildren (Bob LeFevre, Fox Butterfield, Cyrus Eaton Wind Dancer (Cy III), and Mary Eaton) have fond memories of being with her. Grandsons Bob and Cy III remember spending overnights with her in her apartment.

Cyrus did not remarry until after she died in 1956 of cancer.  What drew these two vibrant, passionate people together despite their remarkably different upbringings?  What kept them together for 19 years?  What drove them to divorce? What kind of relationship did they have after the divorce?   How did their relationship and time spent together influence each other?  I don’t know.

Clearly, Margaret thrived with her independence, pursuing her painting career, her traveling, visiting family, and having various amours.  She was talented, passionate, and lived a bohemian, privileged life.  Her art talents have been passed down to granddaughter Mary Eaton,  and great grandchildren Sarah Eaton, and Devon Murphy.  Her love of travel has been embraced by her children and grandchildren.