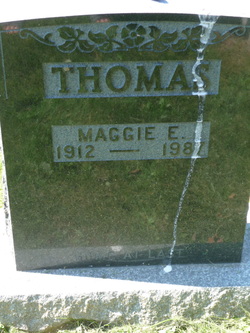 Vivian Godfree, Wayne ? and Thelma Coburn from the Cumberland Historical Society aided Jay find the tombstones of Maggie Thomas and Charlie and Margaret Robertson.  You see, over 30 years ago, Jay, his wife, and two young children traveled north from Massachusetts for a holiday and rented a house on the coast road.  As with many locals they found their way to the welcoming hearth of the Charlie Robertson and his life-long friend Maggie Thomas.  He was in his 80s and Maggie was blind.  In their kitchen the O’Callahans were welcomed.  Jay listened to the stories of the two and began to weave his own stories.  In the kitchen, Jay discovered first the spark and then the details of the story Herring Shed.

Jay knew Charlie and Maggie were dead, but he wanted to find their final resting place to pay his respects.  The marvelous folks from the North Cumberland Historical Society helped him unravel the mystery.  Vivian Godfrey discovered where the Robertson cemetery was, and Wayne led us in his car to the site.  Here was the only plot of land that Maggie ever owned.  Charlie and his wife Margaret share a tombstone.  Thelma Colbourn tracked down the whereabouts of Mary Ellen Clark who is the daughter of Russell Elliott, the minister in The Herring Shed story who had the doleful task of trekking to the Herring Shed where many of the villagers worked to report the news of each young man that had lost his life fighting for peace.  Mary Ellen Clark came to The Thinkers Lodge on Sunday where Cathy and Jay interviewed her.  It was a delight to Jay to learn that her father, Russell Elliott (though deaf and nearly blind) was alive and thriving in Wolfville, Nova Scotia, and had recently been spotted on television.  Russell, in his nineties, holds a weekly virtual coffee chat as it becomes more difficult for him to get to all the activities he still does.