Joey Gilbert worked to preserve the historical integrity of Thinkers Lodge during the massive renovations. 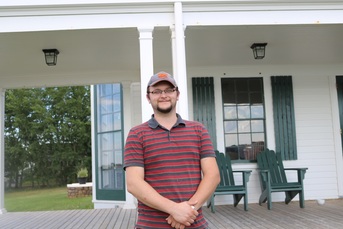 Joey Gilbert standing in front of west deck that he helped rebuild.

In the winter of 2011, Joey Gilbert worked at Thinkers Lodge with C R E D A — Economic Development in Amherst, Nova Scotia, Canada for four or five months. The supervisor was Barton Benjamin.  Keith Grant stayed more months and worked with his brother Rob Grant.  It was essential to keep the historic integrity of the building as they renovated.   Joey worked for Rafes Construction Company from Parrsboro who were originally hired to replace the cedar shingles on the roof.  They had to use galvanized nails and stainless steel staples, which didn’t rust. Because the cedar gutters were rotten, they replaced them with new cedar gutters and rain downspouts: hollowed-out cedar logs.  The crew painted each section of the house as they worked on it.

They carefully rebuilt the west deck (reframed and put posts on) to make it look historic.  They rebuilt the trellis on the deck next to the kitchen.   Everything had to be new and to code but remain true to architectural design and materials.  The crew was initially four men but by the end there were eight.  The cold, icy construction during the winter months made the working conditions difficult and hazardous.    Keith concentrated on dry walling and crack work.  The men replaced the dormers on the upstairs windows.  They wanted them smaller because of leakage problems. The original weights and pulleys were saved, and Joey painstakingly reinstalled them.  The windows are not standard sizes.
Phil McLaren was in charge of rebuilding the basement.  The basement was a dirt and rock cellar that had low ceilings.  Staff recall that it was creepy to go down there. Phil’s crew dug it out by hand with shovels.  They transported the dirt in buckets They jacked the house up and poured new concrete walls about three feet below the actual house.  Stonemasons came from Spring Hill.  In keeping with maintaining historical integrity, they saved the original stones, numbered each one, and then remortared these stones and fitted them around the exterior of the house where they originally were.

They kept the original chimneys and also remortared them

The master engineer had exacting requirements.  They put up steel plate gussets for rafters in one of the upstairs attics.  Joey remembers the difficulty of this job because they had to crawl on their belly in a tiny crawl space.  He had to drill a hole through rafter and through metal and then thread rod through it and add nuts and bolts.

Rob traveled daily from Parrsboro.  Most of the crew stayed at Hillcrest.  Barton and Joey were getting Red Seal Carpenter Master licenses at night. Typically the men went to McMunn’s Restaurant in Wallace because Pugwash didn’t have much open in the winter.

Sometimes the cold weather was so daunting that he felt like he was working in the tundra.  On freezing days they couldn’t grip nails and were unable to work.  The cold weather made people edgy and moody at times.

Joey described the crew as a good group of men to work with.  Joey did construction work for 12 years.  He worked on Sir Charles Tupper’s historical house in Parrsboro.