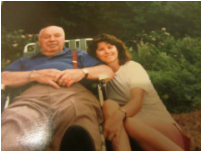 Peggy Walt’s grandfather, Herb Smith, was the proprietor of Esso Station in Pugwash.  He used to drive Cyrus Eaton during the 1950s.  Herb would go to Halifax airport and drive Cyrus to Thinkers Lodge.  Peggy remembers her grandfather saying that when he drove Cyrus and Anne Eaton and that he saw them smooching in the back seat of the car.

Joan Forshner was Peggy’s mother, and she remembers having a meal in the railroad dining cars.  The cars were opulent, and they were waiters, chinaware and crystal and wonderful food.

Herb Smith donated the lumber to build the first stage at Eaton Park.  Peg, Herb’s wife, served lobsters for July 1st during the Gathering of the Clans.  Peg kept a diary.