Glenda Newson Kent shared her memories, diaries and photos from her 1959 summer working at Thinkers’ Lodge. (July 2010 and 2013 interviews)

In 1959 Glenda lived in Pugwash River near Eaton’s birthplace. ”I used to babysit for Donnie and Leo Jamieson’s five sons. Leo worked at Mrs. Webb’s sheep farm in Pugwash River.” They lived in a house built on or near the foundation of the house where Cyrus Eaton was born in 1883. Donnie Jamieson and her husband were caretakers for Thinkers’ Lodge for many years.

First Day on the Job
“In ’59 I finished at Teacher’s College when I was eighteen. Then I came to see Mrs. Webb [Cyrus Eaton’s sister who lived across from Thinkers’ Lodge) on a Saturday and started to work on Monday. Marjorie MacKay and I, who is now deceased, started cleaning, washing windows, and doing floors. That first day we did upstairs rooms five and six and the hallway too.”  The lodge has seven bedrooms, each with its fireplace and bathroom.  Around 1955, it became The Thinkers’ Lodge and hosted conferences for educators and scientists.  Previously it had been a B & B.  The Dining Hall had previously been the Pagweak Tearoom which has originally been a lobster factory. 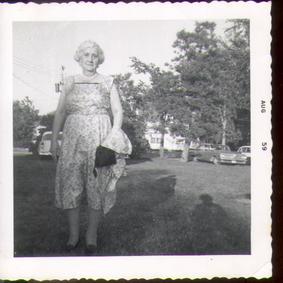 Eva Webb, Cyrus Eaton's sister, lived across the street from Thinkers' Lodge and hired Glenda and the other staff. 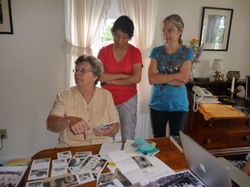 Glenda Newson Kent shares photographs from 1959
with Susie Chou and Adele Wick from her summers when she worked at Thinkers Lodge.

My grandmother [Emily Ross Patterson] kept scrapbooks she cut out of the Oxford Journal, the Amherst paper, and the Springhill Record. She cut out any interesting things [about Cyrus Eaton and Thinkers Lodge.] In fact she made ones for Wallace, one for Pugwash, one for Thompson Station, and one for Oxford.  Grammie was blind the last five, six, or seven years. Before my grandmother passed away in 1967, Mom [Grace Newson] went through all of her things and kept the scrapbooks and tried to keep them up after.”

Note the Pugwash River scrapbooks and the ones about Cyrus Eaton are preserved at the North Cumberland Historical Society. 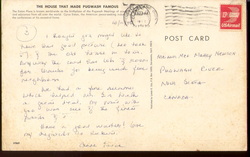 " We had a fine summer which helped Mr. Eaton’s health a great deal.
My visit with you was one of the finest parts of it.”   Anne Eaton 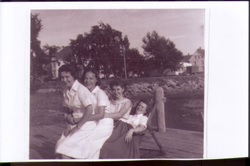 “A bit of foolishness on the deck of The Dining Hall” was how Glenda described this photo of ??? 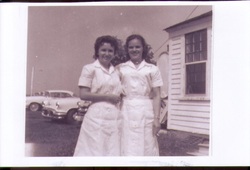 Norma Smith and Beverley Dingle worked at the Dining Hall and The Thinkers Lodge in 1959. “Some days I came at seven and it would be nine or ten at night before we finished.” ~ Glenda Kent

“Mrs. Eva Webb [Cyrus Eaton’s sister who lived in the yellow house on Water Street across from Thinkers Lodge] provided us with white cotton dresses like the ones nurses wore. We each had two, which we had to wash, starch, and iron daily. We weren’t allowed to sit down while we wearing the white uniforms. We also wore nylons with white laced shoes.” 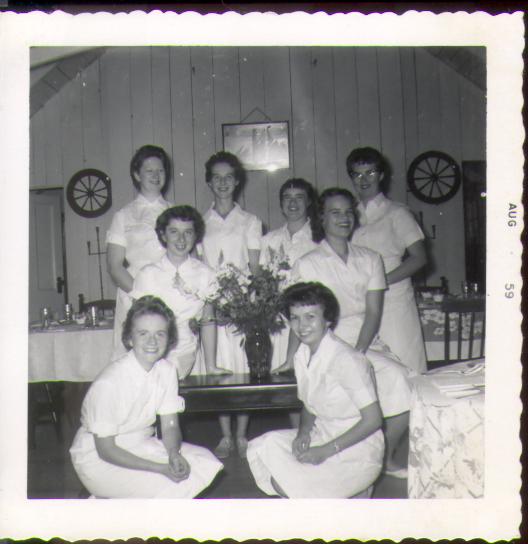 The laundry was done in the Staff House [now called the Gate House],which also housed the chefs and Mr. Bourque.

Daily, we laundered the towels, the linen napkins and table cloths. Between conferences, we were swamped with the bedding. It took two of us to iron the big linen table cloths. Marilyn Reid did laundry most of the day.  Some days were hot and humid. We sweated a bucket!  The girls often would help Marilyn when we had a break between meals.  As you can see, we would make it fun.  ~ Glenda Newson Kent

Thinkers Lodge and Dining Hall Staff Meet Conference Participants from around the world.

At the 1959 International Conference on Biological & Chemical Warfare, “There were four Russians, four from the U.K., eight from the United States, two from France, one from India, four from Canada, one from Sweden, one from Japan, one from Israel and one from Denmark. They were all so friendly, but we didn't have much chance to really chat with them because we were staff. They were very pleasant to meet, particularly their wives who would often ask questions about local things and so on, but the men seemed to be busy.  Not that we couldn't talk to them, but I think Mrs. Webb had kind of instilled in us that you're staff and you do your thing and they'll do their thing.” 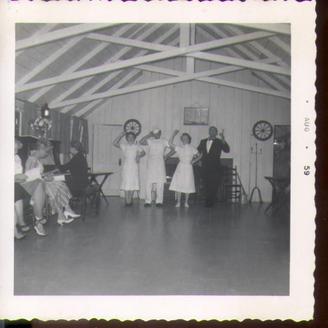 The staff and guests often performed skits or shared music in The Dining Hall.  “Tuesday the fourteenth, we practiced our song and dance for our closing exercise for the final evening” of the college presidents’ conference.”  ~ Glenda Kent’s excerpt from her diary 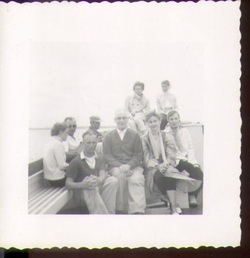 Days off – Time to Frolic

Glenda described some of her days off. "The deans have gone and the chefs took us to Heather's Beach," which is a beach between here and Amherst.  Must've taken us out for a swim.”

“I went to Brenda’s wedding and that’s where I caught the bouquet.” Glenda caught two bouquets that summer.

Going out on the boat was a treat.

“For the Deans’ last night, Mr. Bourque took me up the river to Mum and Dad’s house to choose old costumes from Grammie’s trunk in the attic. My mother was Grace Newson, and her mother was Emily Patterson. Grammie had moved from Thomson Station to Pugwash River from a three-story house, and came to Pugwash River to a two-story house so the attic was full of antiques and collectibles.  With Mr. Bourque’s help, we chose costumes for the Deans and the staff.”  ~ Glenda Newson Kent’s diary - 1959 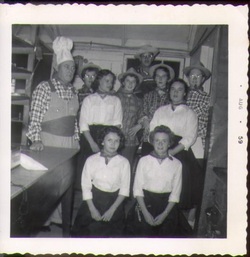 Square Dance on the last night of the Dean's conference.
From One Job to the Next

“The kitchen at Thinkers’ Lodge was really cramped quarters. Once in a while if I had a few minutes I would be sitting down doing lesson plans, planning how I was going to do my first day of school. In June I graduated from Oxford Regional High School (Nova Scotia Normal College.)  In September I went from Pugwash directly to teach Grade Five. I was anxious to be prepared.”

“The day after my last day working at Thinkers Lodge, I went to my first teaching job in Bible Hill near Truro. When I asked the principal for a box of chalk, he said, “A box! You’ll do well to get two pieces.” Thanks to my summer job at Thinkers Lodge, I bought many supplies for the students.”

Glenda Kent taught for many years.  She now runs a dairy farm with her husband, son, and grandson in Lower Truro, Nova Scotia 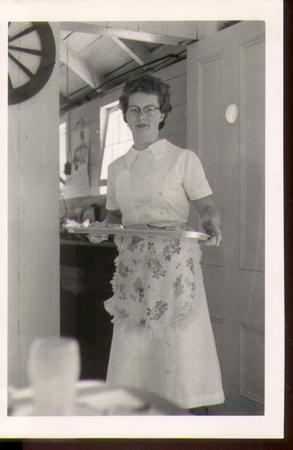 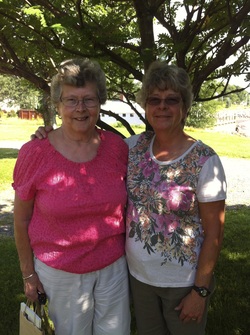 Glenda Kent Newson and Cathy Eaton in 2013. Both have taught school for many years. 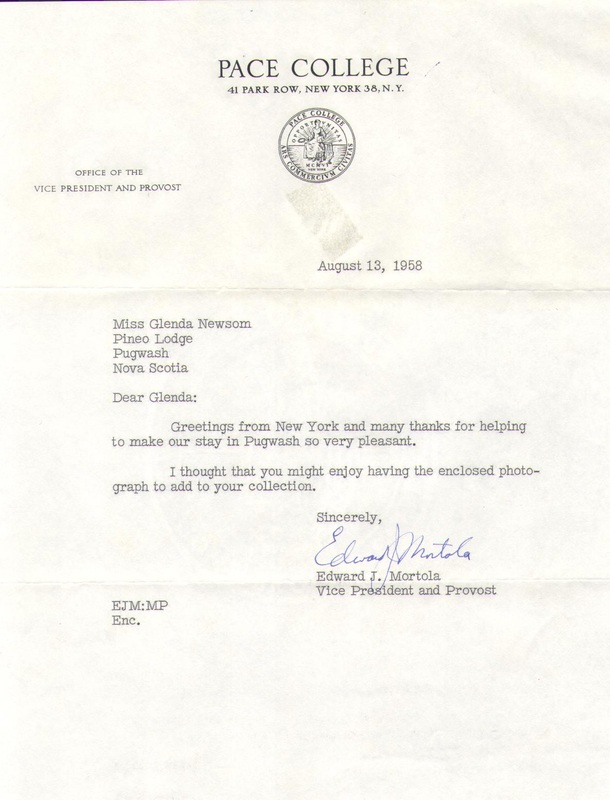