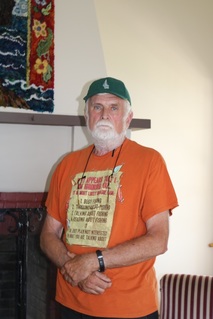 Gerald (Jerry) Sarson came to Thinkers Lodge on July 24, 2016.  He recounted how in the early years of the conference, Cyrus Eaton provided accommodations for attendees and their spouses but in at least one case found separate accommodation for a teenager.  At the time Gerald was 15 or 16 in the mid fifties.  His parents (Gerald and Doris Sarson) boarded the son of a Harvard professor so he could have companions to hang out with. He believes the conference lasted about a week.

The boys and girls swam off the Little Wharf directly behind the old Coop Store on Water Street.  The teen from Boston had claimed he couldn’t swim, but when fell off the wharf, he bobbed up and stayed float doing the dog paddle.  The watchers commented that he could swim a bit after all.  By the end of the conference he was able to swim across the harbor with all the kids.  His father was shocked and please how his son had learned to swim.  Not only did the teen become a confident swimmer, but by the end of the week, he jumped off the big wharf at low tide.  That was his big thrill.


​Gerald remembers peeking in the train car accommodations where some of the conference attendees stayed.  He remarked that they were stately and had a lovely wood interior.

Gerald shared how Leo Jamieson brought a conference attendee to Herb Smith’s garage in a Lincoln car.  The power window didn’t work.  The garage in Boston couldn’t fix it.  The garage in Moncton couldn’t fix it.  Leo said this mechanic in Pugwash “could fix damn near anything.”  Gerald’s father, the mechanic, went home and got a bobby pin from his wife ,which he used to fix the window. The man came back the next year and explained that he didn’t get bobby pin replaced because the window kept working.  He came back to thank Gerald Sr.

Gerald Jr. originally planned to be a lobster fisherman, but the season was too short.  He didn’t want to work in the salt mine because he remembered the bump at Spring Hill when the coal mine collapsed and so many men tragically died.  He joined the RCMP and was trained in Ottawa, then was sent to New Brunswick where he met his bride, Jean, a registered nurse.  When he volunteered for northern service, he was sent to Tucktoyuk at the mouth of the McKensie River, which empties into the Artic Ocean.  His fiancée got posted several hours, and kindly Gerald’s commanding officer changed his post to where she was and then agreed to preside over they wedding.   They settled in Inuvik, which was so beautiful in the summer.

Gerald retired in 1991 and lives in Truro now.