The Empress Hotel and Eaton Park: Cycle of Destructive Fires and Building

After the great fires of 1928 and 1929, Cyrus Eaton returned to visit Pugwash. The devastation to the families, businesses and homes caused by the blazing infernos must have chilled his heart. He felt compelled to help rebuild the village of his youth. As part of this effort, he hired contractors and farmers to level the burnt out wharves and warehouses beside Pugwash Harbour and create a park for the villagers to enjoy. Like Benjamin Mattinson who built the Empress Hotel in 1918 on this site, he recognized the beauty and serenity of Pugwash Harbour.  Today the park is named after Cyrus Eaton. Both men created jobs for the local labor force and helped the village prosper. 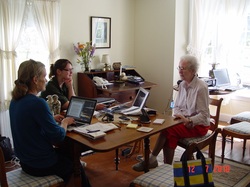 Thelma Colbourne is the daughter of Charles and Ivy Mattinson.  A member of the Cumberland Historical Society, Thelma shared the history of the Empress Hotel. In two separate interviews (2010 and 2013), Thelma recounted stories that capture her grandfather’s perseverance in overcoming major personal tragedies caused by fires and a mine explosion to establish security and prosperity for his family. 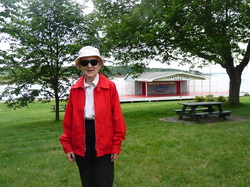 Thelma, the granddaughter of Benjamin Mattinson, stands in Eaton Park where the Empress Hotel once stood overlooking Pugwash Harbour. She explains, “Before the fire, this was the site of the Empress Hotel.” 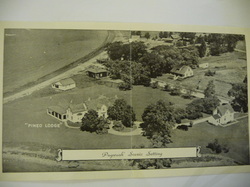 “Cyrus Eaton recognized the natural beauty of Pugwash Harbour and its sunsets and thought it was a perfect spot for a park. He hired local farmers to come with their one-horse dump carts and dig by hand earth from the side of the hill where the salt terminal is now located. They carried it down and filled in the cellars of the burned out buildings and also extended the shoreline considerably.”

The park extended from Black Street to the Pineo Lodge, which was transformed in 1929 by the architect, Andrew Cobb, from the Pineo family home to the Pineo Lodge Bed and Breakfast run by Cyrus Eaton’s sister, Eva Webb. It belonged to the Pugwash Park Commissioners, formed in 1929. In 1955 Eaton designated the Lodge as a place to host conferences. After 1957 it was called the Thinkers Lodge.

The Mattinson Brothers Learn the Construction Trade and Travel to Find their Fortune Before Returning to Nova Scotia.

“Benjamin Mattinson and his brother Dan went to Boston to learn carpentry and lumbering in the 1870s. In Boston, Benjamin met a Pugwash River girl, Mary Eliza Demings, who had worked at a spa for ten years. They returned to Pugwash River where they married. He settled in Thompson Station, which was on the new railway line, set up a lumbering business, and built a number of buildings.  n the late 1870s he and brother Dan decided to go to Colorado where tales of gold lured young men. After Mary Eliza became pregnant, they decided to return home. Originally Grandfather Mattinson thought it would be fun to travel by covered wagon, but then word came that the Indians were attacking covered wagon trains so they traveled by train. Aunt Lilla, who was six-years-old, recounted how they were told the Indians were going to attack the train, and the men were instructed to sit by the windows with their guns pointing out. The Indians came riding over the hill all paint and feathers and followed alongside the train for miles. Neither group shot at each other, and eventually the Indians rode away.  No one knew why they didn’t attack except perhaps because the men were ready.”  ~ Thelma Colbourne  Cyrus Eaton’s parents moved briefly to Colorado after the death of their first four children.

“Grandfather Mattinson came back to Thompson Station from Colorado with his family. However, before too many years, sparks from his steam-fired mill caught the roof of the house on fire and eventually burned the mill, the house, and the lumber in the yard.  So Grandfather Mattinson decided to go to Springhill and join his brother, Dan in the construction business because the Springhill Mine was a booming business. However, in 1891 there was an explosion in the mine, killing 130 men and boys.  Springhill became a depressed community. Because Pugwash had suffered a number of devastating fires, Grandfather Mattinson figured Pugwash was a good place to set up business.”

“They settled in Pugwash River near where Cyrus Eaton was born.  Benjamin Mattinson bought a piece of land on the water that was big enough to build his mill and his house. He felt he could cut logs on the farm, raft them under the train bridge and hoist them up to his mill, which was two-stories high. On the bottom floor, logs were sawed into lumber. On the second floor were machines making shingles, windows, doors, floorboards, and all kinds of trims.  All this was powered by a big steam engine.  He used to say, ‘He made everything in his mill for constructing a building except the nails, glass, and plaster.’”

The Deed to the Empress Hotel

“My grandfather bought the land for the Empress Hotel. I found the deed at the archives in Amherst, which described the boundary. It said, ‘Start at Mr. Murray’s wharf, go to a stake on Water Street, follow Water Street to the big rock, back to the shore, and follow the shoreline to Mr. Murray’s wharf.’ The land was located where Cyrus Eaton Park is now.”

“The Empress Hotel was built by my grandfather, Benjamin Mattinson, who was a contractor. The hotel was built in 1917 during the First World War. The hotel had an upper and lower veranda around three sides of the hotel so that the guests could view the street or the harbour. In the basement there were show rooms where travelling salesmen could then sell their merchandise to the public. The three-story part of the building was a store. My cousin who had polio was allowed to pick a special gift at Christmas from the toy store.” 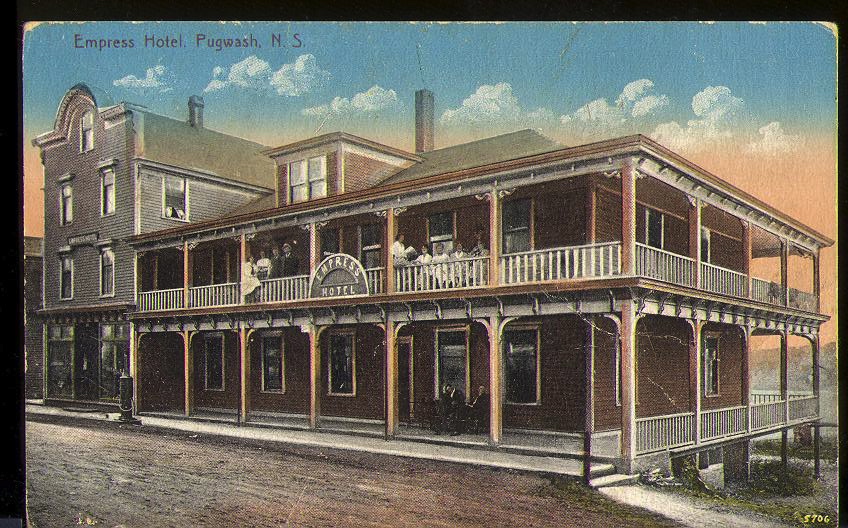 “My grandfather’s son, George, was overseas. Men were coming home minus arms, legs etc. Grandfather was sure George would be maimed so he decided to build a hotel where his son could sit at his desk and run the business. In fact, it was discovered in France that George was a millwright so he was taken out of the trenches and they sent him to Paris where he spent the rest of the war installing and repairing engines. He came home unhurt and really didn’t need or wish to run a hotel. It was sold after a few years and it burned in one of the fires in Pugwash in 1928. During the process of being sold to Mr. and Mrs. Canfield, the Empress Hotel burned to the ground in 1928.”   ~ Thelma Colbourne 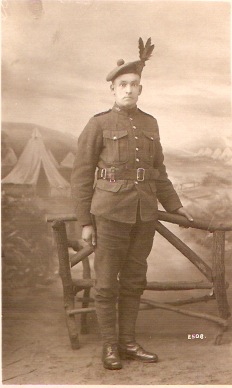 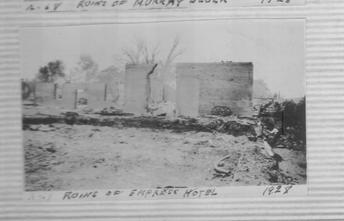 The Empress Hotel Burns: One Theory

“There are different theories of how the fire started. My dad, Charles Mattinson, said that Mr. Murray’s lobster shed became very smelly in the summer, and the local people were not very happy with it. It was located just above Mr. Murray’s wharf next to the Empress Hotel at the intersection of Water Street and Black Street.  His impression was that someone decided to get rid of the smell by ‘accidently’ igniting the shed.  Unfortunately, the wind changed from going over the water to going toward The Empress Hotel.  The shed burned, the Empress Hotel burned, and numerous buildings and houses on both sides of Water Street burned. This was in 1928.”   ~ Thelma Colbourne 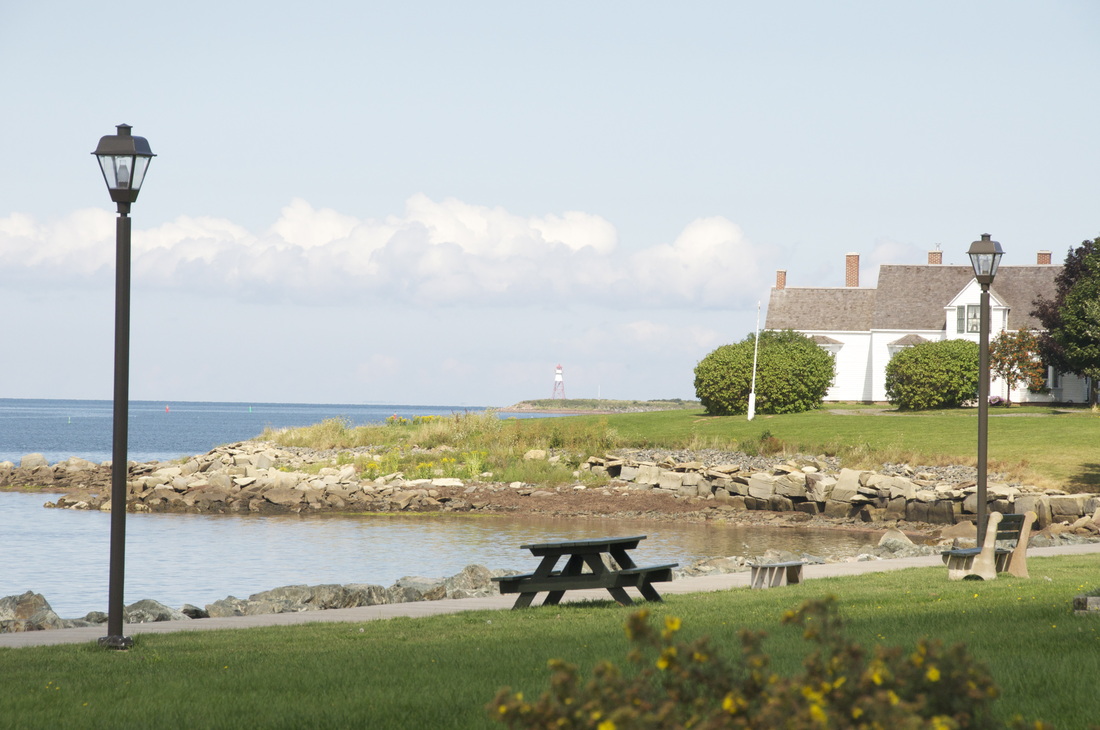 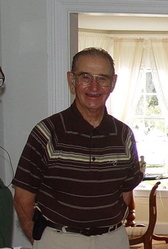 Ralph Fullerton expressed his gratitude that Eaton Park had been restored and described how the park is a gathering spot for families eating ice cream, children playing on the playground, couples picnicking, and friends walking.