Cyrus Eaton was born in Pugwash River in 1883 and moved to Pugwash Junction when he was about 8.  He moved to the United States in his early twenties where he and his family lived on Euclid Ave in Cleveland, Ohio.  In 1912 he bought Acadia Farms in Northfield, Ohio which became his permanent residence. In 1913 he became a naturalized US citizen. In 1928 he purchased land in Deep Cove off Mahone Bay and Andrew Cobb designed his summer home, where he spent summers until 1978 the year before his death.  In 1928 he formed the Pugwash Park Commission which purchased Pineo Lodge in Pugwash.  It was his intention that the Pineo Lodge and the Pagweak Tea room, later known as Thinkers' Lodge and the Dining Hall, would bring visitors to Pugwash and provide jobs for the local population.  Eaton never lived at the Lodge nor was it ever his summer home. 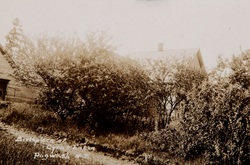 Cyrus Eaton was the fifth child of Joseph Eaton and Mary Adelle MacPherson Eaton. After their first four children died, they considered moving to Colorado.   Eaton was born in Pugwash River. This photo was taken in 1957.  Later Donnie and Leo Jamieson, who ran Eva Webb's sheep farm and were care-takers for Thinkers' Lodge, built a home on or near where the foundation of this home was. Cyrus had three younger sisters: Alice, Eva, and Florence. The youngest child was Joe. 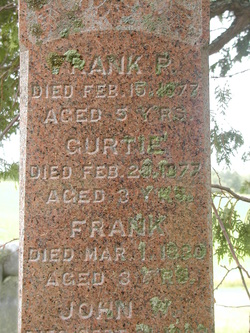 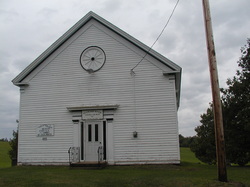 The four Eaton children are buried next to what was once the Baptist Church where Cyrus Eaton's grandfather was minister. 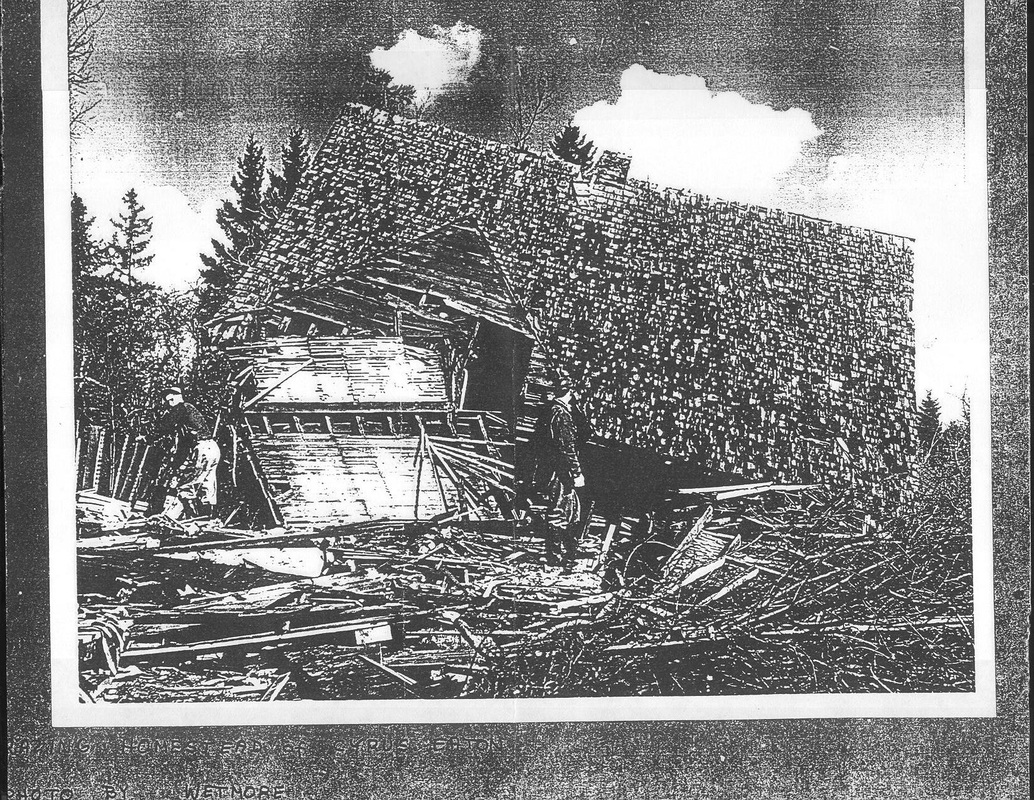 This is believed to be the ruins of the house where Cyrus Eaton was born. Below are photos provided by Paolo Brenciaglia: Probably Cyrus and Eva's first home, a barn, and shed 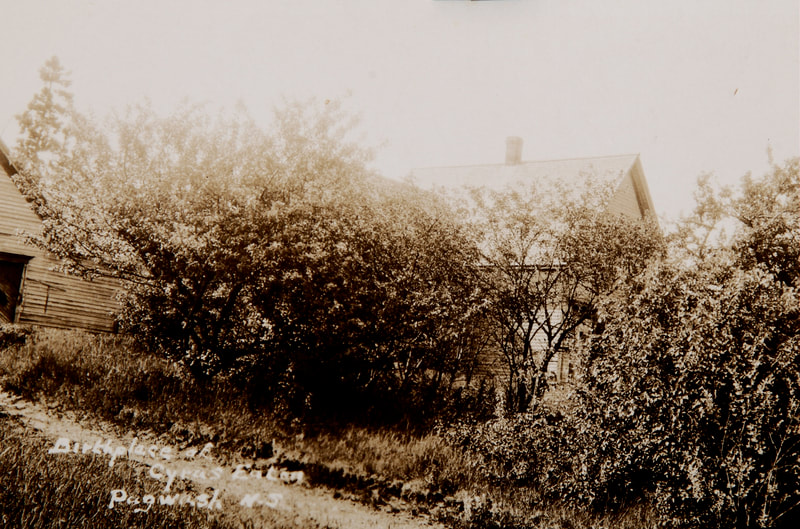 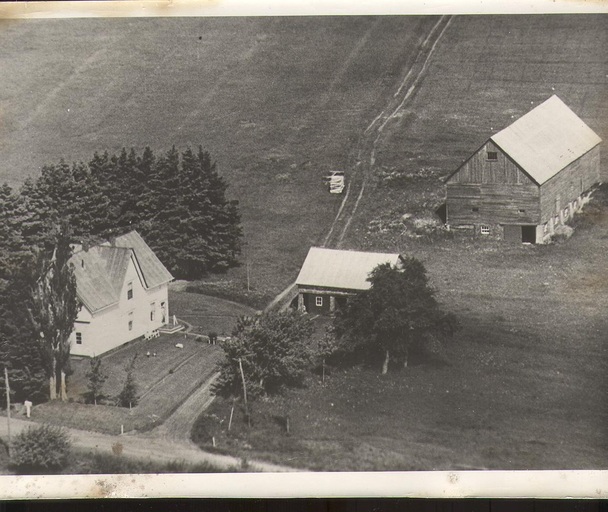 Cyrus Eaton moved to Pugwash Junction and lived in the home where his Uncle Charles lived. His teacher, Margaret King, also boarded here. The other building was a carriage house for wagons and sleighs. Mr. Griffen pulled down the barn. Harold Lunds logged the land in the 40s. 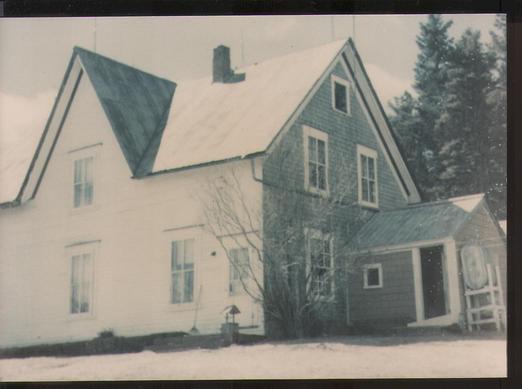 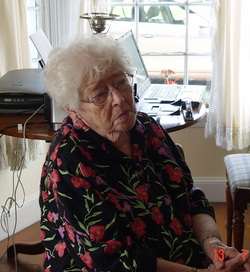 Violet Williams provided this photograph of her first home in Pugwash Junction.  Cyrus Eaton and his Uncle Charles had lived in this home. The teacher Margaret King boarded there.  Eaton later funded the first indoor bathroom here.  Her son William remembers playing in the barn.  Later, the house was taken down, and she moved across the street. The land where the house and barn had been became the Eaton Cemetery.

Violet said that she wished she had stayed in the house.  It had five bedrooms. She wanted her husband to buy that house, but Mellon Place was handy to the school, so her husband picked it.  Cyrus stayed in the house as a boy, where Charles Eaton lived, when Cyrus went to Doherty Creek School before the railroad went through.  Violet's husband went to the old school and also one year at Margaret King School.  The Little old school closed and was used as a barn. Violet had 13 kids - 8 boys and 5 girls and all healthy. 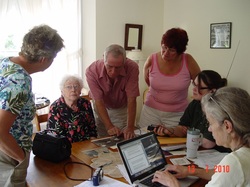 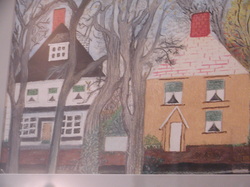 Crayon drawing of store owned by Joseph Eaton.
Violet Williams made a crayon drawing of the store owned by Joseph Eaton.  She keeps this drawing framed in her home. Violet said,"You wouldn't recognize it now.  It was a general store.  That was when you could buy stuff out of barrels.  We bought cheese. We bought down our own jugs to fill up with vinegar.  The sugar was in a drawer.  It was scooped out and put in a bag.  The same with the oats. They carried rubber boots and snow boots, maybe some work clothes.  They had china in a cabinet for purchase.  Mr. Wood owned the store when Violet Williams used to go hang out with her friends on Saturday nights.  The store was in business until the late 1970s.  It was on Junction Road. 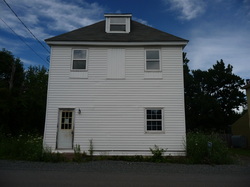 Photograph taken in 2010 of the building that was Joseph Eaton's former store probably in Pugwash Junction. 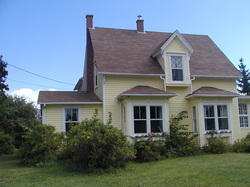 Eva Webb lived in this home across Water Street from Thinkers' Lodge.  Her grandson, Paolo Brenciaglia, often visited her during the summer and helped build the tennis court.  Later he and his wife Sandy lived in the home until they sold it around 2011. 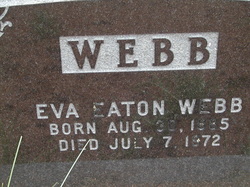 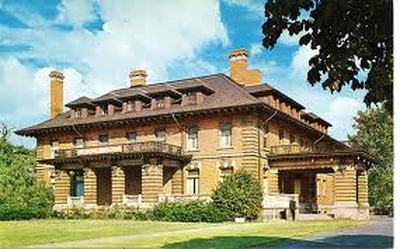 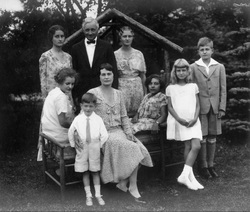 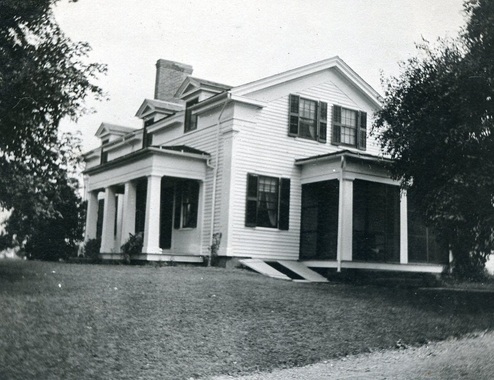 Cyrus Eaton bought Acadia Farms. In the 1912 it was a summer home for his large family. He raised Shorthorn Beef Cattle and horses. It was his habit to walk daily, and he frequently rode his quarter horse, Red, and cross country skied until his late 80s. Then he moved there in ? and lived there until his death in 1979 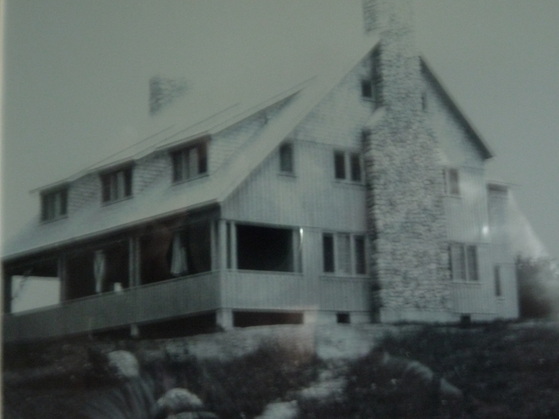 This is a 1928 photograph of Cyrus Eaton's summer home in Deep Cove. Andrew Cobb built this three-story house where Eaton, his children, and grandchildren spent many wonderful summers hiking, fishing, boating, swimming, and of course picnicking. 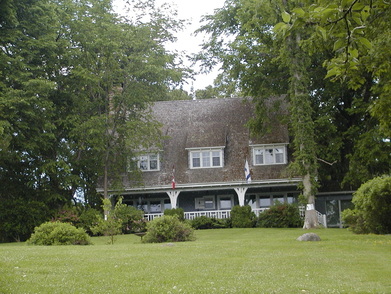 Cyrus Eaton loved trees and planted them on the property of his summer home.  He could identify every tree and tell you where it came from.  After his death, The Cyrus Eaton Foundation contributed funds to purchase land for a conservancy. Hazel and Stan Havill bought the house and property, and with their children and grandchildren, spent many happy times there. 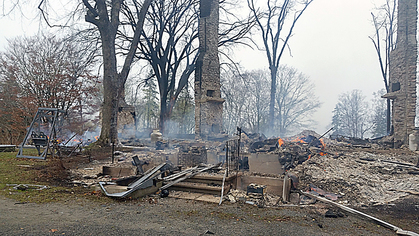 The historical summer home of one of Canada's most famous financiers burned down on Sunday, reduced to a smoldering testament of Cyrus Eaton's Nova Scotia connection.
The estimated 5,000 square-foot, three-storey wooden home in Deep Cove was completely engulfed in flames by the time the Blandford and Area fire department arrived, approximately seven minutes after receiving the call at 8:47 a.m., according to chief Philip Publicover.
"Upon arrival the structure was fully involved. That's from the ground level to the peak," said Publicover. "There was nothing we were going to do to change the outcome at that point. Given the ferocity of the fire and the venting of the propane tanks, crews were directed to not engage. We did not put a drop of water on the fire. We allowed it to burn." Nov 25, 2015 - Read whole article

Cyrus Eaton was buried in a meadow overlooking Mahone Bay on his Deep Cove property, where he had often walked, enjoying the peace, the marvelous view, and checking on his cattle. 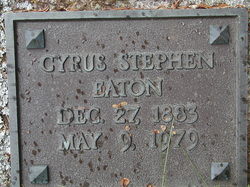