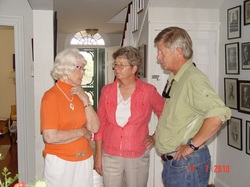 Donnie Jamieson takes Cathy and John Eaton around Thinkers Lodge and tells numerous stories about how the house was set up.
Her husband, Leo, had worked for Eva Webb on the sheep farm before becoming caretaker for Thinkers Lodge.  Over the years, many of her family were responsible for getting the Lodge ready for guests.  This involved scraping and painting the unheated interior.  Her son upholstered much of the furniture in the living room.  His wife, Mary, continued the family tradition of taking care of the Lodge.

Donni Jamieson explained that typical evening meals included lobster one night salmon another night, and turkey another night.  She said that Mr. Eaton wanted the guests to samples some of the cuisine delights of Nova Scotia. Donnie began working at Thinkers’ Lodge in 1967.  Her husband Leo Jamieson began working for Eva Webb between 1943 and 1950. The couple built a house on and next to the foundation where Cyrus Eaton was born in Pugwash River.
Donnie explained how the bigger central room used to be two rooms: a library and a staff room where Betty Royan and the secretaries typed up the speeches and talks of the conferences.  She described the dirt-floor basement as being most unpleasant, she showed us how they made the beds, she talked about the different guests pictured on the walls.  In the kitchen, she pointed out differences in the remodeled kitchen including how a new pantry had replaced the old staff bathroom.
She stopped at the Russian tea set and told the story of how it had been stolen and recovered by a Mounty who stopped a young man on the road who refused a ride.  That made the Mounty suspicious so he checked out the youth's backpack and discovered the missing tea set