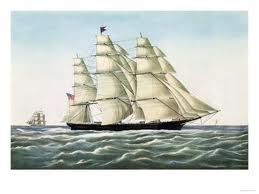 Donald McKay began his apprenticeship by working from sunrise to sunset six days a week, a workweek of 70 hours that he would describe later in life as "slavocratic." The following year Donald was joined by his younger brother Lauchlan.  Donald is buried in Newburyport.

/.;Richard C. McKay in his book: Some Famous Sailing Ships has this to say:
From all accounts, it was the headquarters of considerable jocularity; and, we daresay, the future builder-owner of a fleet of the finest ships that ever sailed the main, often joined his companions, when they went out upon those festive nocturnal expeditions that made these precocious shipyard apprentices the terror of the neighborhood.
http://clippershipmuseum.blogspot.co.uk/p/biography-of-donald-mckay.html 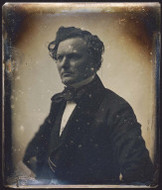 Donald McKay was born on a farm in Shelburne County, Nova Scotia. He was educated in the common schools there and was apprenticed as a ship carpenter in New York City after emigrating in 1827. After mastering his trade, he was commissioned in 1839 to finish a ship in Wiscasset, Maine. He soon formed a partnership in Newburyport, Mass., where he built a number of packet ships. As his reputation spread, he received other assignments for design and construction. In 1844 he was chosen to build a ship for the transatlantic traffic by Enoch Train, who also induced him to set up a shipyard in East Boston. 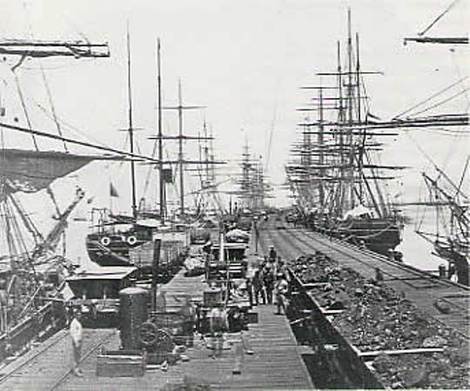 Donald McKay (1810-1880) was a master shipbuilder, with his shipyard located on Border Street in East Boston. His company launched many of the fastest clippers in history, with Flying Cloud being the most famous. A clipper ship is a large sailing vessel with three or four masts and square-like sails. The bow or front of the boat is wide and raked forward, allowing increased speed on the open ocean. The clippers were utilized for the New York-San Francisco run during the California Gold Rush, as well as trans-Atlantic routes. The clipper ships of the 1850s are an inspiration for today's Coast Guard cutters, which are designed for speed in rough seas.  Two monuments are erected to him in Boston.