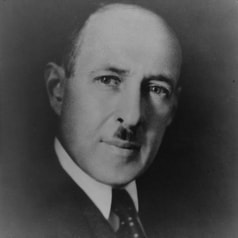 Building Beauty
https://museum.novascotia.ca/collections-research/vanguard/gallery/objects/andrew-randall-cobb-1876-1943
​
Beautiful buildings can be taken for granted, especially if they have been around for years. They become touchstones for our communities and culture yet all those buildings begin as a concept in someone’s head before they are designed and built. Nova Scotia has known many fine architects, with Andrew Cobb being one of the most renowned. Andrew Cobb was born in Brooklyn, New York. His father died when Andrew was 14, then he and his mother (Mary Randall) moved to Nova Scotia where she had family roots.

Andrew continued his education at Acadia University before studying architecture at the Massachusetts Institute of Technology and later the École des Beaux-Arts in Paris. Those studies and his travels in Europe planted ideas in him that would translate to a lifetime of beautiful and iconic buildings he imagined, mostly in Nova Scotia. Andrew designed both private homes and institutional buildings that were known for. All are acclaimed for their exterior aesthetics, craftsmanship and interior appeal. Some show influences associated with the Beaux-Arts or Tudor Revival schools, others reflect Craftsman or Georgian elements. There is not space enough to list every building Andrew designed. His first was the Dingle Memorial Tower (1909), in collaboration with S.P. Dumaresq. Other buildings included the former Casino Theatre in Halifax, a Presbyterian church in Wolfville, and the Greenvale School in Dartmouth.

​He designed elegant residences for the wealthy as well as more modest homes for the less affluent. His most ambitious single design project was for an entire mill town in Corner Brook, Newfoundland. University campuses were another specialty. Cobb designed virtually every building on the Studley Campus of Dalhousie University and various notable structures for the University of King’s College, Acadia University and Mount Allison University. In addition to his architectural practice, Andrew Cobb taught at the Technical College of Nova Scotia from 1912.  At the age of 67, Andrew’s life — and career — were cut short when he died tragically while riding on a Halifax city bus that was struck by a dockyard truck.