John Eaton, the grandson of Cyrus Eaton, is a Pugwash Park commissioner and has dedicated recent years to restoring the Thinkers Lodge so that it can continue to be a place where educators, scientists, artists, and people passionate about improving the world, can meet and share ideas.  In June, 2014, he will be the commencement speaker of Pugwash High School. 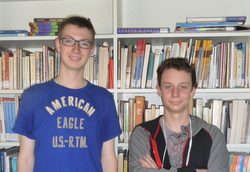 Will Blakie and Justin Longilie interviewed John Eaton as part of their studies of the Cold War in their Global History Class.
*Answers are excerpts from the recording that pertain only to the interview questions. Background information from the interview is not documented in this file.

How are you currently involved with the Thinker’s Lodge and the surrounding property?

What are your reasons or motivation for becoming involved with the Thinker’s Lodge?

John: My grandfather had a home and a cattle farm in Ohio and had a home and cattle farm in Upper Blandford, Mahone Bay Nova Scotia. But the thinkers lodge was still there in 2005 and this seemed like an opportunity to get back involved with some things that my grandfather had accomplished that have some historical significance and mean a lot to certain members of my family.

What has been your role in the upkeep and restoration projects that have been happening to the Lodge.

Why do you think it is important to preserve this property and its legacy?

John: One of the goals that we have is to get Thinker’s lodge on what is called Canada’s tentative lest and then to get Unesco which is a division of the United Nations to recognize Thinker’s as a world cultural heritage site heritage site, and I think we have a pretty good shot at doing it. It’s hard to understand in this day and age just what a remarkable accomplishment it was I 1957 to hold this conference and have it be as successful as it was…

So uh, the legacy in Pugwash is that instead of trying to increase the conflict, instead of trying to claim there are these irreconcilable differences,  the idea was well let’s get some of the people, not the politicians but,  the politicians and scientists who know what they’re talking about, let’s get them together and see if there’s anything they can agree on. And probably the very first thing they were able to see, with very little distraction… So what they almost immediately figure out is they, A they like on another and respect each other as scientists, and they trust each other, probably more so than their own governments.

Are there currently and major updates or changes to the Lodge or property in the works?

John: Well the next job of course is to move on to the gatehouse, which I’m sure is obvious to every single person who drives by it…

Then I think we take a break from stuff that relate to building and we try to figure out whether we are developing enough programs, and enough interest in those programs, and enough economic benefit from those programs to see if there should be further physical additions, perhaps in the tennis court area. Or whether you just leave it the way it is, we’ll have to see.

What do you envision or hope for with regard to the future of the Thinker’s Lodge?

John: In the future what we really want there to be programs, and we hope that these programs honor to the extent that its possible, kinda what my grandfather’s interests were…

A lot of them were education related, or cultural as opposed to scientific, You hope that you can do programs like that, and you hope that there is an actaul benefit  to region and the village, an economic benefit.

When were you first introduced to the Thinker’s Lodge?

What are your most significant or favorite memories of this property or the surrounding area?

I might have been in Nova Scotia at the time, but I would have been fishing off the end of the dock, not paying any attention to what was going up there. And my grandfather kept that political part of his life separate from the family part. So consequently of have lots of favorite memories of deep cove, I have no favorite memories of Thinker’s Lodge.

What are your most lasting memories of the Cold War Period?

I certainly remember how controversial my grandfather was, I don’t remember being afraid of an atomic weapon, I was never worried we needed to have a bomb shelter or something like that, I was probably the wrong age.

Do you feel like the Cold War in any way influenced your beliefs or opinions in the present?

So lets do this a slightly different way. What I learned from grandfather, if the U.S. government and al the newspapers are saying one thing, its not a bad idea to be distrustful of that point of veiw.

Do you agree with your grandfather’s philosophy and opinions on world affairs?

I think his philosophy was pretty simple, we need to get along, because the alternative is unthinkable.  The secondary philosophy was people are probably not as evil as you might believe and if you get to know them and they get to know you, you have an opportunity to forge a relationship, which is at least respectful if not outright cordial and friendly. So yes, I believe that today.

If so, did this influence you to become involved with the Thinker’s Lodge today?

And that’s one of the reasons I did get involved with Thinker’s Lodge.

How important do you think the Thinker’s Lodge in conjunction with the Pugwash Peace conferences has been in promoting and achieving peace around the globe?

So Thinker’s Lodge of course is separate from the Pugwash peace conferences, which are currently headquartered in Rome. It’s important to understand that the umbrella organization for the Pugwash Conferences is one organization. And a great many countries, I dunno how many, 50 or something have national Pugwash organizations, like Canadian Pugwash. The Pugwash Parks Commissioners shares the name and was the birthplace, and helped to fund the first ten years of conferences or so, but we’re very separate. That said I am very close to 3 or 4 people at Pugwash international, and we certainly hope that there is going to be more conferences that will be held back in Nova Scotia. And we believe that the whole idea of promoting dialogue is important, if not vitally important today.

Is there anything you would like to see change about the Thinker’s Lodge, its care, or plans for further development?

Well yeah, in part I think its going to be important that the province, the community embrace the Thinker’s Lodge and see them as a unique resource to be honored and develop. Like the people who live in Pugwash should think of the Thinker’s Lodge as their own treasure, and should be looking for way to get involved, and how can they help on some volunteer basis.