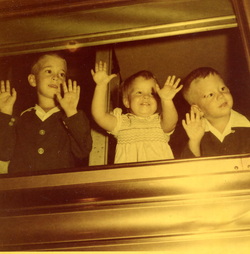 John Eaton, as a four year old, traveled by train, boat, and car from Northfiled , Ohio to Deep Cove, Nova Scotia, on Mahone Bay, where they spent the summer with their grandfather, Cyrus Eaton. 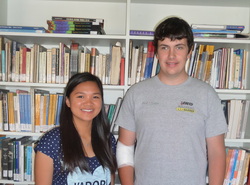 1. What was it like growing up in America as an Eaton?

I grew up in Cleveland, Ohio. There was an element in Ohio that was really anti Cyrus Eaton. I was aware that I came from a controversial family. It's weird to be a kid and pick up a paper and read a headline about your own grandfather. He was never afraid by all the threats because my grandfather was unfazed by all of this and never a fear monger. I went to high school in Connecticut and the average tenth grader didn’t know about Cyrus Eaton.

2. Did Cyrus talk openly with what was going on regarding the Cold War and Pugwash meeting?

Nobody was going to talk about what actually happened in the meeting. There was publicity about the meeting but they did not report to the public about the meetings and what exactly was discussed. I never knew anything particular about anything that was discussed. He talked a great length about the Cold War and nuclear weapons and how they could never end in anything but a total disaster for the human race.

3. Was there less tension in Nova Scotia compared to growing up in the States?

Yes, in fact one of the big reasons that Pugwash conference in 1957 was held in NS because Russians were not welcome to come to America but were welcome to come to Canada.  Americans did not trust people coming from the Soviet. That sort of thing didn’t happen in Nova Scotia, Canada and as you know nothing happens in Pugwash. This is one of the reasons why it worked well because Pugwash is small and out of the way place, out of the press.

4. Did you ever go to a Pugwash conference, if so where and when?

No,  I never went to a Pugwash conference.

5. Do you feel the Pugwash conference were helpful in taming down the Cold War? Why?

I think the Pugwash conference was very helpful because a lot of very famous scientist began pointing the fact that we have developed a way the technology to destroy ourselves but we didn’t have the political tools to figure out how do we avoid destroying ourselves and the scientist did a good job making sure people understood these concerns and getting rid of nuclear weapons movement. On the other hand there is still 12 or 13 nuclear weapons around the world. We don’t have the same cold war tensions so I think that my grandfather and the Pugwash conference did a great job at calming down the tensions created by the Cold War. So I would say very helpful in bringing the Cold War to an end but less helpful in getting rid of nuclear weapons.

6. How well did you know your grandfather?

I knew my grandfather pretty well. He would invite all of his grandchildren up to Deep Cove for about 6 weeks every summer. It was like a summer camp for the grand children. He was a big outdoorsman, hiking, canoeing, fishing, and swimming. Everyone ate together at the same time and dinner was always formal and had formal conversations.  He wanted to teach people how to be thoughtful and an independent thinker. If everyone was going in one direction his instinct would be is to go the other direction. I lived near him in Ohio, so I was one of the lucky grandchildren.

7. Are you involved in Pugwash conferences?

No. I try to help in any way that I can but I don’t organize them other than offer the Thinker's Lodge as a place where they might consider having them.

8. Can you tell me what it was like spending your child hood in deep cove?

It’s a place that I still remember like it was yesterday. I think all of the cousins remember those days very fondly. It’s a wonderful place.

9. Did the Cuban missile crisis affected your life and how? What do you remember?

I think other people were more frightened about the Cuban missile crisis than I was because in my family my grandfather didn’t believe we were so much in danger of the Soviets attacking us with nuclear weapons. He was worried that maybe with some miscommunication we would end up going to war with them. As a ninth grader I don’t seem to have memories of it as a traumatic experience. My grandfather told me if the newspaper tell you to be scared, it is probably not true. I certainly remember it, I don’t remember being scared about it.

10. Are you interested about your grandfather's work and all the things he had done?

Yes, absolutely that’s why I have worked hard to restore the Thinkers Lodge. I think Thinkers Lodge could be recognize as a UNESCO world heritage site and the reason is that if you're looking for a physical place like a building or a structure where the movement of getting rid of nuclear weapons began there’s really only one place on the planet that you can pick and that's Thinkers Lodge. He was always a fascinating guy the more I gotten to understand what he was trying to accomplish the more interested I am. He was more of a one of a kind person nobody is going to do what he did.

Here is what my grandfather used to say the secret to success he would say pick something you really love to do and just work harder at it than everybody else and you would be a success. He spent his time exercising, riding horses, skiing, playing hockey, and hiking. He believed in a strong mind a strong body. He was incredibly well read and knew a lot about different world issues. He would read at night get up early in the morning and he would always go on a 3 mile hike, then he would have breakfast then go to work and that was he’s routine. The main thing he drank was hot water. He became a health fanatic in his 30s: ate well, never smoke or drink alcohol, no bad habits. I didn’t feel academically had to achieve because I was an Eaton but I always felt that there was some kind of obligation to work hard at what you were doing.